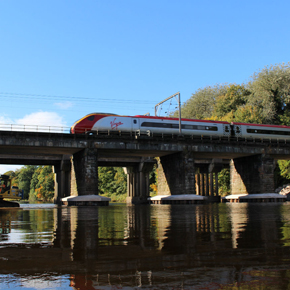 Story Contracting and Hanson Concrete have recently completed bridge strengthening works on a 70 metre long rail viaduct across the River Eden, situated between the Sheepmount area of Carlisle and Etterby. Hanson specified Sika concrete admixtures for various concrete mixes used on the project.

The 70 metre viaduct comprises five stone piers and a concrete deck. Following an underwater survey for Network Rail Infrastructure Projects (Civils), it was confirmed that the viaduct substructure was in need of repairs to the foundations and stone piers.

A long term solution was required which would offer scour protection to both the masonry and foundations.

Story Contracting installed a total of 64 tonnes of permanent interlocking sheet piles around the piers, driven to refusal into the mudstone bedrock. 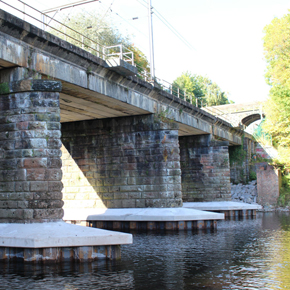 Following this, 282m3 of Hanson concrete was poured between the pier and the sheet piles, with a capping beam formed at cut-off level.

The concrete contained a specialist underwater admixture, Sika UCS Pak, which would allow Story Contracting to place the concrete underwater without contaminating the river by increasing the cohesion of the concrete and preventing the wash out of the cement paste.

Specifically developed for the production of underwater concrete, Sika UCS Pak meets the requirements of BS 8443 for the ‘specification for establishing the suitability of special purpose concrete admixtures.’

The admixture is packaged in water soluble bags to enable ease of addition on site.

In addition to the concrete repairs to the foundations and stone piers, Story Contracting were also challenged with the installation of a temporary causeway, in order to gain sufficient access across the river to undertake the works.

This was achieved by stacking stone filled gabion baskets upon the river bed, using 6m steel bridge plates to span the gap. A stone piling platform was then installed between the piers. Large diameter pipes that pass through the construction were installed to maintain river flow.

The works were completed and implemented in controlled stages which took into consideration the strict environmental conditions surrounding fish migration and maintaining river flow.

The newly strengthened viaduct was put to the test in December 2015 when the river encountered a substantial level of flooding. Inspections to the structure in January 2016 showed no adverse effects on any of the bridge strengthening works.

Hanson’s bespoke concrete mixes are now being utilised to repair many of the damaged structures across Cumbria following the damage caused by storm Desmond last year.