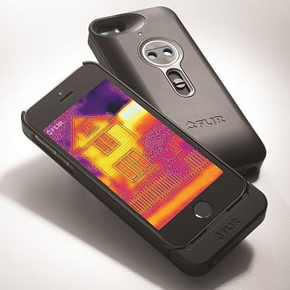 FLIR’s second-generation thermal camera for smartphones, FLIR ONE, was featured on Channel 5’s Halloween edition of The Gadget Show, where it proved to be the most popular ghost hunting tool.

The model was sampled by a viewer and compared with an infrared spectrum monitoring system and a ghost hunting teddy bear with integrated sensing technology.

It was named the most effective ghost hunting product and praised for its affordability; its price tag allows for universal access to thermography.

The technology behind thermal cameras allows ghost hunters to visualise the heat of an area; as paranormal activity is believed to have an influence on the heat of objects, the camera can be used as an analysis tool.

Supplied by PASS, FLIR’s only platinum seller in Great Britain, the FLIR ONE thermal camera is compatible with Android and iOS mobile devices. Shaped like a small dongle, it can be plugged into the phones’ micro-USB slot or Lightning connector; the user can run the technology through FLIR’s app.

The device has been designed with its own internal power supply to ensure that it is not a burden on the smartphones’ battery.

The technology can be used to view people in thermal, to spot hidden thermal insulation problems, to test temperature levels and to spot overheating electrical components.

Get 10% off a FLIR ONE thermal camera with PASS