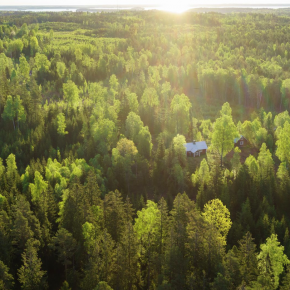 Södra Wood Ltd celebrates the 20th anniversary of the International Programme for the Endorsement of Forest Certification (PEFC), the world’s leading forest certification system and the standard of choice for public timber procurement policies in the UK.

PEFC’s certification systems are recognised in 51 countries across the world and more than 300 million hectares of forest are managed in compliance with PEFC’s internationally accepted sustainability benchmarks.

The 20th-anniversary celebrations included a birthday event recently held in Sheffield, home of PEFC UK, during which certificates were presented to a select group of supporters, including Södra Wood Ltd, as a gesture of recognition and thanks.

Södra, one of 20,000 companies and organisations to have achieved PEFC Chain of Custody certification, was one of the first 15 supporters of PEFC UK back in 2001. Certificates were presented by Alun Watkins, Executive Director of PEFC UK and Ross Bradshaw, Chairman of PEFC UK.

Simon Henry, recipient on behalf of Södra Wood Ltd of the fifth certificate presented, explained what makes the PEFC so important: “For any reputable timber supplier to do business with any key customer, it simply needs to be certified by the PEFC. The PEFC are custodians of the values and standards that we live by here at Södra. They, like us, are passionate about sustainable forest management and creating a strong framework for the protection of the world’s forests, while at the same time promoting a strong global timber market. It’s an organisation that we love to support.”

On what the PEFC means to Södra, Simon continued: “We’re a company with a very strong moral compass and as such, we’re proud to have the badge of honour that is PEFC certification. Being recognised by the leading forest certification group is something that we’re very proud of. From our own personal business point of view, it also contributes to the work that we at Södra are trying to do to raise awareness about the numerous benefits of timber – whether that be its sustainability credentials, versatility, efficiency, or potential to help the UK meet housebuilding and emissions targets. We very much look forward to continuing our support of the PEFC. Here’s to the next 20 years and beyond!”