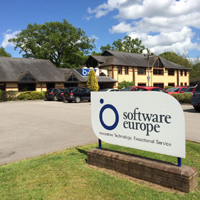 The company used MELFinance to avoid burdening its cash flow with the up-front cost of the project.

Software Europe was the first £100k plus project financed by MELFinance.

MELFinance has been operating since January 2014. The scheme bundles costs into a 5-year heating, cooling and ventilation finance package with repayments structured over a 3, 4 or 5 year term. Software Europe is the first MELFinance project to exceed £100,000.

Software Europe specified a £107,000 installation which included three Mitsubishi Electric City Multi R2VRF heat recovery systems, in addition to a new electrics package and water heater in the toilet areas of the building.

The City Multi R2 series has been developed with the ability to provide heating and cooling simultaneously. Using R410A refrigerant it delivers greater efficiency with its higher specific heat capacity when compared to R407c or R22 – this also allows for smaller pipe sizes, longer pipe runs and reduces the volume of refrigerant within a system.

The new system means that Software Europe is now saving over £12,000 in running costs per year.

We knew we would be saving a lot of money, commented Business Support Assistant Fiona Jenks, The gas bill has gone because we now have no gas coming into the building. The cost of running the previous system was very expensive on the electricity as well so thats going to reduce significantly.

The new heat recovery system also boasts significant environmental benefits. Software Europe is now achieving a high COP and SEER of between four and six, which means for every kilowatt of energy they put in they are getting four to six kilowatts of useful energy back out of the system.

It helps our own environmental policy which always features when we complete tenders for new business. People like to know youre green and looking after the environment, which we always look to improve upon where we can.