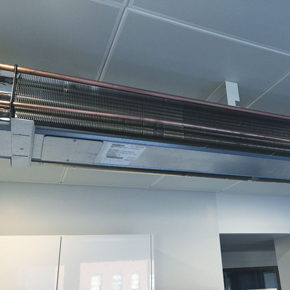 Sontay has a complete range of environmentally friendly sensors to control and monitor chilled beams. The water-based cooling systems feature an unobtrusive design, making them a popular choice for commercial buildings such as offices, hotels and hospitals. 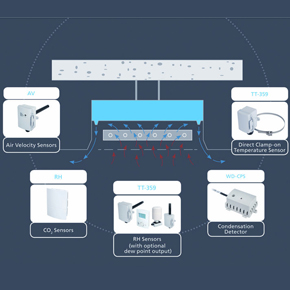 Chilled beams and ceilings reduce energy consumption whilst improving comfort levels for occupants by reducing the risk of draughts and eliminating intrusive noise and aesthetic problems.

A standard chilled beam uses coils to exchange heat with the air in the room so when the warm air rises, it is cooled by the chilled beam and then falls back to the floor, where the cycle repeats itself.

Sontay have developed a range of temperature, RH, condensation and air velocity sensors to allow users correctly control the beams to get the maximum benefit.

Its solutions include the WD-CPS Condensation Prevention Sensor, which detects the dew point on chilled surfaces such as chilled beams and adjusts accordingly. 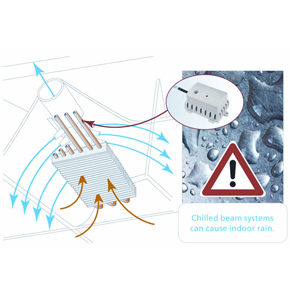 Chilled beams within ceiling systems are designed to use the dry cooling principle by selecting the ventilation rate, supply air conditions and chilled water flow temperature so that there is zero risk of condensation.

In order for it to work, the space air dew point temperature should be around 2°C lower than the flow temperature of chilled water in the ceiling or beam system.

There are numerous ways that chilled beams can be controlled, such as altering the rate at which air is supplied via an active chilled beam or varying the temperature of the air supplied.