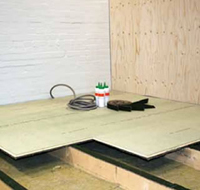 The Hush-Panel 28 Floating Flooring can be fitted as both structural and overlay boards over timber and concrete in refurbishment or new build projects.

It is compatible with a number of Hush-Systems and complies with Building Regulations Part E (England and Wales), Section 5 (Scotland) and Part G (Northern Ireland).

The panels are manufactured with chipboard and a 10mm resilient layer of Hushfelt, which has been incorporated to resolve undulating in the surface of the boards.

To install the Hush-Panel 28 Floating Flooring, it must be laid in a broken bond pattern.

Hush-10 Joist Strips should be stapled onto timber joists tops before application.

All teegee joints should then be glued using Hush-Bond Panel Adhesive.

Hush-Seal 20 Perimeter Seal should then be applied around all the perimeters, where a 10-15mm expansion gap should have been left.

The seal ensures that the floor floats freely of the walls to maintain acoustic isolation.

Find out more about the Hush-Panel 28 Floating Flooring