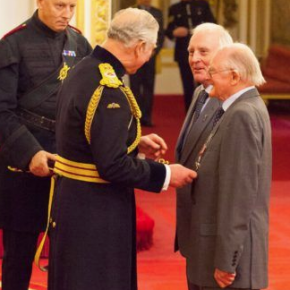 Stand up for this pair of Stannah MBEs

Alan and Brian Stannah, who lead the namesake company for more than five decades, have both been awarded MBEs for services to British manufacturing.

They were awarded their accolades by the Prince of Wales at Buckingham Palace on 23rd November last year, as the company celebrated it’s 150th anniversary.

Their relationship has been hailed as the ‘perfect business partnership’, with Brian specialising in commercial and marketing matters, whilst Alan’s expertise was in engineering and production operations.

Together the duo led Stannah through its most challenging yet most successful periods. For instance, amidst tough economic situations that came in the early 1970s, Brian proposed the idea of stairlifts, giving Alan the troublesome issue of making a product from only a few drawings – the first Stannah stairlift entered markets in 1975.

Brian then focused his endeavours on developing the domestic market, whilst still finding time to begin building the company’s export market.

Alan played a crucial part in developing industry standards with the British Standards Institute (BSI) and the International Organization for Standardization (ISO).

Alongside their diligence and determination shaping the business, it is the pair’s dedication to both the wider industry and their own employees that also helped earn them the commendation they have received over their illustrious careers.

Stannah pride themselves on how its staff are treated and how they treat customers. In light of this, a profit sharing scheme started in 1980 which still runs today, to help them share in the company’s successes.

Together, both Brian and Alan have made Stannah the big name they are today. Their individual roles have assisted British business and Britain’s exports in incredible, inspiring ways and both are immensely honoured to have been awarded an MBE.