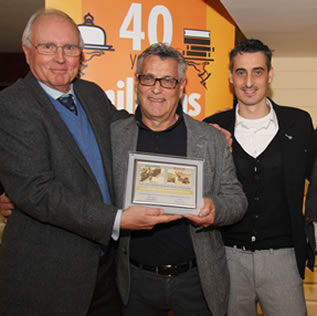 Hosting a management meeting looking back over the years from the company’s foundation, to plans for development in 2015, staff, partners and colleagues from the Orpington service branch, the Daldoss family and Stannah Group chairmen, Brian and Alan were praised for their efforts.

Both Stannah and Daldoss are family companies with three generations currently working together, with a particular mention going to Stannah’s Chief Engineer, Pete Whitehead, who has been with the company for 40 years.

The marketing campaign around the milestone features a 39-year old Microlift which is still fully operational and serviced by the Orpington branch since its installation.

The company held an event at Hawk Conservancy in Hampshire

Stannah have pledged to donate a Microlift to a project, with nominations including the British Legion in Bristol, a community centre in Cumbria and a food bank in Cheshire.

Alan Stannah spoke of how the family’s 40 year association with the Daldoss family began, how Corrado Daldoss began the company after the 2nd World War, and how the company won the 15th International Inventors’ Show gold medal for the first electronically controlled service lift in 1966.