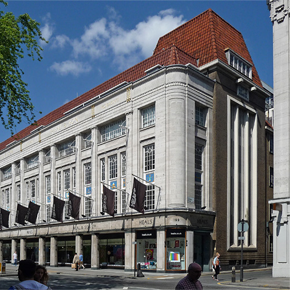 A Grade II* listed building on London’s Tottenham Court Road has benefitted from a major refurbishment and refit of the upper floors, including the renovation and, where necessary, replacement of more than 90 of the building’s windows.

The building, which dates back to 1854, is now a flagship store for the Heal’s furniture brand. The renovations to the building’s 3rd and 4th floors included windows on the Tottenham Court Road façade and on Alfred Mews, which runs along the side of the building, in addition to those within two lightwells to the rear.

Associated Steel Window Services, a Steel Window Association member, was assigned to undertake the work of assessing, renovating and replacing the windows, which were of varying types and ages.

In total, 70 windows were refurbished, which involved the repair and overhaul of the frames, with most windows repaired in situ with the exception of those that had to be removed to allow access to the site.

Damaged glass was replaced, whilst clear glass was substituted where panes had been obscured. All fittings and handles were were burnished and lacquered at the workshop before returned to the site and missing items were matched and replaced from ASWS’s stock.

Where original windows were damaged beyond repair, or required reconfiguration, new windows were installed. A total of 20 replacements were manufacturing using W20 sections with 14mm 4-6-4 double glazed units. Louvres were introduced at the top of some windows to accommodate air handling extract ductwork.

On the building’s Alfred Mews elevation, new windows were made for a 17 metre long bay which projects from the building, made to align exactly with the internal columns. W40 section screens, some close to 8 metres long including balcony doors, were manufactured and installed, and double glazed with 28mm units.

All new windows were hot dip galvanised and polyester powder-coated while original windows were redecorated with the application of a spot primer, undercoat and gloss coat. The finish throughout was traffic white RAL 9016.