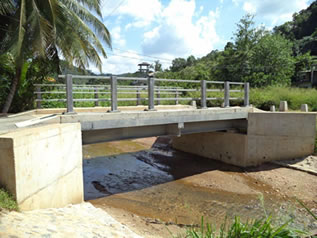 The plant provided hot-dip galvanising treatment to the steelwork used to create the concrete and steel bridges, replacing the existing rope and timber structures as part of the multi-million infrastructure project.

Worksop Galvanizing was contracted to treat the components and containerise them into fourteen shipments, which each one containing components categorised into fifteen individual sets to ensure they could be quickly loaded and unloaded and easily built on site.

Cleveland Bridge was instructed to design, supply, fabricate, ship and erect various bridges, ranging from six metres through to 30 metres as part of a major infrastructure development led by the Sri Lankan ministry of Economic Development.

Due for completion in March 2015, the project was commissioned in order to improve mobility for those in isolated communities in the country, playing a major role in the islands social and economic progression.

The previous bridges were potentially dangerous for public access and were also regularly washed away by debris carried in monsoon swollen rivers, although the installation of the new concrete and steel bridges will ensure a safe passage that is resistant to rust and corrosion.