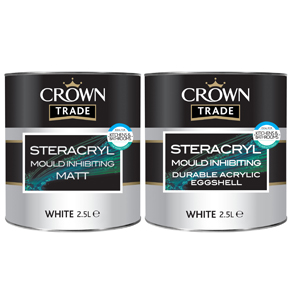 Crown Paints has developed a mould inhibiting paint to counteract the effects of ‘condensation season’, characterised by steamy windows and dampness on walls.

Debbie Orr, Crown Paints’ Trade Marketing Manager, said: “As the condensation season starts to set in, usually in October and November, properties can be affected by additional water around windows and walls as temperatures start to drop.

This combination of lower temperatures – particularly in areas where the efficiency of glazing, insulation and ventilation needs to be taken into consideration – can lead to water droplets forming on surfaces. Over time, these wet areas can provide a perfect breeding ground which allow mould spores to form.”

Crown Trade Steracryl Mould Inhibiting Paint has been tested to the British Standard BS3900:G6. The acrylic eggshell system is also washable, making it ideal for kitchens and bathrooms.

In addition to the mould inhibiting formula, Crown Trade’s Steracryl range includes an anti-bacterial product, suited for both communal bathrooms and kitchen areas where hygiene is of utmost importance.