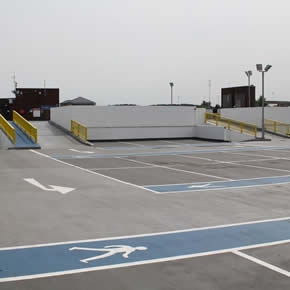 A number of Sika’s structural repair systems have been used to restore an old car park, which was spoilt by inadequate waterproofing.

The Walkden Street car park, which was originally constructed in 1964, comprises six decks, split across three levels; in total, it can accommodate 433 vehicles.

Up until recently, the top deck’s original waterproofing membrane was still in use. However, it was found to be failing, and causing damage to the car park’s reinforced concrete structure, which was beginning to show signs of spalling and corrosion. Water ingress had caused a number of defects in the construction joints, lower deck systems and concrete soffits.

To ensure the safety of the car park’s users, the top deck was closed in 2012.

With the desire to restore the facility to full service, Mansfield District Council enlisted Makers Construction to carry out renovations works. Makers undertook structural repairs, waterproofing and redecoration: with a vast array of repair and protection solutions available, Sika was contracted as a single source supplier.

Sika began by carrying out an onsite survey to identify the primary areas of degradation on the top deck. To remedy the problems, Sika MonoTop concrete repair mortars and Sika Galvashield galvanic anodes were specified for corrosion control in the soffit areas.

Sika’s Sikagard-675 anti-carbonation coating was then applied; it was also used on the lower decks to seal around gully outlets, preventing water ingress into the shops below the car park.

Around 4,600 square meters of Sikafloor Pronto fast-curing decking systems was applied to the deck area and access ramps, to provide a slip-resistant, waterproof surface.