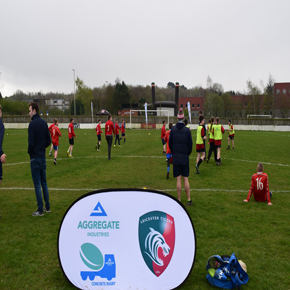 Construction and infrastructure company Aggregate Industries have announced the success of their ‘Concrete Rugby’ scheme, which has reached in excess of 1,000 pupils across Leicestershire.

Chris Hudson, Managing Director, Asphalt & Readymix Concrete at Aggregate Industries, added: “As a business committed to giving back to the communities in which it operates, we feel incredibly passionate about our ‘Concrete Rugby’ initiative.

“The unfortunate reality is that a large number of children in the UK don’t play outdoors or exercise nearly enough, while child obesity rates are still disturbingly high. As such, initiatives as these have a vital part to play in helping to raise awareness of a healthy lifestyle and the role sports can play in this.

Blaine Bonnin-Ward, Rugby Development Officer at Leicester Tigers who leads the programme, said: “It has been a fantastic first nine months which has helped to bring the importance of a health and wellbeing firmly to the forefront for local children and schools.

The programme, which began in November 2016, was delivered to 1,081 children across 13 secondary schools.

Notable successes include a rejuvenation of an afterschool rugby club at Rushey Mead School in Leicester, with over forty children attending and the creation of a girls’ rugby club at Saint Martin’s School in Nuneaton, who have enjoyed good runs in recent tournaments.