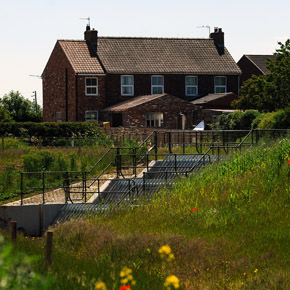 Hydro-Brake Flood Alleviation vortex flow controls have been installed as part of a new £3.1 million flood alleviation scheme in the North Yorkshire town of Northallerton.

Northallerton and its surrounded villages are situated in a low lying river valley, surrounded by steep, well-drained agricultural land which is susceptible to flash flooding. The town experienced major floods most recently in 2000, 2008 and 2012 which caused widespread disruption and damage including to the town’s Friarage Hospital.

In order to reduce the risk of flooding to homes and businesses in the town, vortex flow controls were installed upstream of the town’s refurbished culverts to protect flood-prone water courses. The flow controls enable excess water to be held back in specially built flood storage basins in agricultural land on the approach to the culverts.

The Turker and Sun Beck watercourses that run through the centre of the town cause major flood threats to amenities including Grade II listed buildings, conservation areas and listed monuments as well as the hospital.

At times of heavy rainfall, excess floodwaters can overtop the watercourse within the agricultural land on its approach to the culverts, sending flows to cause flooding in the east of the town.

The Environment Agency area project manager Ian Cooke commented: “The Sun and Turker Becks have repeatedly overtopped and threatened the town. That’s why, after consultation and looking at similar successful schemes in other areas, we decided to use upstream storage to reduce the flooding risk.”

The resulting scheme at the urban boundary requires little to no maintenance and is resistant to blockage. The Hydro-Brake Flood Alleviation flow controls can be carefully-sized to minimise the back-up storage volumes even under high rainfall conditions.

This means that the risk of the farm land on the outskirts of Northallerton flooding and threatening nearby developments will be minimal in the future.

Ian Cooke continued: “The scheme is designed to also improve protection to the area from flash floods. The design meets sustainable principles, by attenuating excess flows and allowing them to discharge at a controlled rate.”

The Hydro-Brake Flood Alleviation vortex flow controls are based on an industry-standard method of flow attenuation, which is often used in much smaller dimensions as part of urban surface water drainage designs.

For the project at Northallerton, Hydro sized the controls to create an optimal internal geometry which delivers the best hydraulic performance with the minimal amount of upstream storage.

In comparison to alternative flood control devices, such as orifice plates or penstocks, the vortex flow controls have a larger opening which allows more water to flow through the culvert unimpeded, meaning less flood storage is needed.

At the same time, the risk of blockages are reduced. Together with the fact that the flow controls have no moving parts or power-requirements, this means that minimal maintenance is required.

An 857mm outlet diameter Hydro-Brake Floow Alleviation vortex flow control was installed on the Turker Beck with a maximum design flow of 1 cubic metres per second.

The installation at Northallerton follows successful flood alleviation schemes built on the White Cart Water in Glasgow, the River Douglas in Wigan and at Weedon Bec in Northamptonshire.