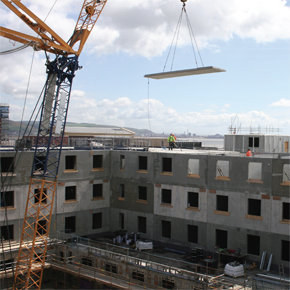 St Modwen, the regeneration specialist behind the new £450m Swansea University Bay campus, is delivering an additional £50m of student accommodation and student facilities at the site which opened its doors in September 2015.

The accommodation agreement will see 545 additional student apartments for occupation during the first quarter of 2016. Main contractor, Galliford Try, was appointed to the contract in 2014 and work began on land, formerly a BP distribution hub, in 2015. ABC+D takes a look… 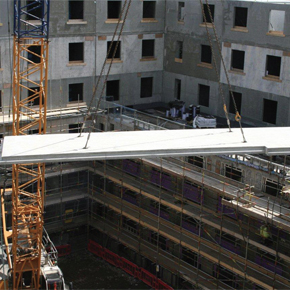 Based on a system in which walls, floor and ceiling slabs are linked together to form a crosswall construction, the panels are factory-formed to suit design requirements.

Altogether, the contract required some 2,400 individual precast walls, floors, stairs and landings. Gable walls and party walls are 160mm thick with each room floor slab 175mm thick. Window and door openings have been accommodated and each bedroom has four conduits cast into the walls for electrics and communications networks. All horizontal and vertical sections are designed for ease of build, linking together with hidden tie rods.

Joints are finished with a high strength non-shrink grout, fully conforming with Building Regulations. Walls and ceilings are to a quality fair-face finish allowing for a simple gypsum wash before final decoration. As part of the project, 541 individual bathroom pods are also being installed.

The precast modular building system offers excellent acoustic and thermal mass properties as well as the fire-resistant qualities associated with precast concrete. To date, over 33,000 precast concrete rooms have been manufactured by FP McCann and erected on a variety of projects, one of the most prestigious being the 788-room University of East London campus at Royal Albert Docks. Nationwide, 30 student accommodation projects providing nearly 19,000 rooms have been completed.

Ongoing contracts include Southampton University and the student accommodation on part of the huge £1bn North West Cambridge development. Swansea University’s Bay Campus is on a 65-acre former BP Transit site in Neath, Port Talbot on the eastern approach into Swansea and is one of the few global universities with direct access onto a beach and its own seafront promenade.

The Campus provides academic, student accommodation and research space. Although development work will continue until 2020, most of it was completed during the first phase and opened in September 2015. 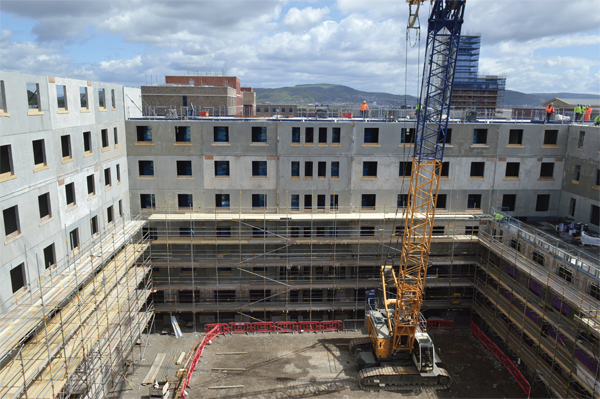 Colleges at the Campus include the College of Engineering and the School of Management. Facilities include the Tower Information Centre, home to central support services for students, a state-of-the-art Bay Library, the Students’ Union facilities and meeting rooms and an impressive Great Hall that will house an auditorium for 700, lecture theatres and a café with views across the Swansea Bay towards Gower and Baglan Bay.

The new Swansea campus is a major highlight of St Modwen’s 3,500-acre regeneration programme across South Wales. The ongoing development of the university will create a world-class educational establishment that will benefit students, staff and the local community for generations to come.