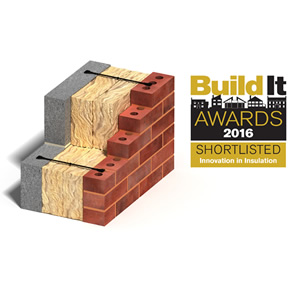 The latest addition to Ancon’s Teplo range of low thermal conductivity wall ties – Teplo-BF – has been shortlisted in the 2016 Build It Awards’ ‘Best Innovation in Insulation’ category.

The Teplo range has experienced commercial success since its introduction to the low energy construction market. Since the first TeploTie was voted ‘Best Innovation in Insulation’ in the 2012 Build It Awards, the range has been recognised almost every year: in 2013, Ancon’s Cavity Wall Tie Product Selector App was shortlisted and Teplo-L was commended a year later.

The range, which has been used in the UK’s first masonry cavity-wall Passivhaus and similar low energy projects, has recently received recognition at the World Architecture News Product Innovation Awards.

Judged by a panel of industry experts, the Build It Awards are a celebration of recent developments and innovations in the self-build sector.

Teplo-BF will be judged alongside four products, all in competition for the programme’s most prestigious ‘Innovation in Insulation’ award.

Teplo-BF features the same basalt fibre body as Ancon’s original TeploTie. However, it has been developed to incorporate moulded safety ends, which make it safer to use, and an enhanced mortar bond. It experiences an 80% increase in bond strength over the original product, guaranteeing its suitability for use with lime and other slow-drying mortars.

Offering a thermal conductivity of 0.7W/mK, the product is deemed a ‘thermal bridge’ in U-value calculations.