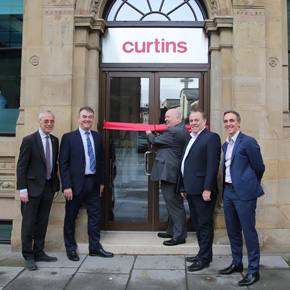 The Curtins are re-opening in Liverpool

National Engineering and Transport Planning consultancy Curtins has relocated its headquarters to a new location in Liverpool City Centre.

The company were established in 1960 by Bill Curtin and began as a small consultancy in his Liverpool home, before moving into an office and opening a further 13 offices around the country.

Curtins has experienced exponential growth in recent years and this move examples its firm dedication to its staff and founding city.

The engineering firm will be relocating 60 staff from Curtin House on Columbus Quay, home for over 20 years, to the former Merseytravel HQ on Tithebarn Street. The 11,000 square foot building has been completely transformed in order to create a contemporary, inspiring workplace.

The company has been at the heart of the engineering for a number of iconic Liverpudlian buildings, from the renovation of the Albert Dock in 1982 to more modern projects, with current work including large mixed-use developments such as Pall Mall, Paddington Village, plus Liverpool Waters and Wirral Waters.

Moving to a workspace within the city centre means the expanding company can start progress with its evolving business plans for continued growth and development throughout its seven specialisms; those being Civils & Structures, Transport Planning, Infrastructures, Environmental, Conservation & Heritage, Geotechnical and Principal Designer.

Curtins’ Chief Executive Rob Melling regarded the move as ‘symbolic’ of the progress the company has made, now boasting a 430-strong workforce and said he was ‘really excited’ about the move.

Meanwhile, Mayor of Liverpool Joe Anderson, who officially opened the office, commented: “Curtins is a great Liverpool business success story and its growth over the decades is a shining beacon in how investing in and nurturing local talent will reap its rewards.

“I was honoured to be asked to open their new headquarters and help celebrate the start of the next exciting chapter in their history.

“Curtins is playing a huge role in the transformation of Liverpool and these new headquarters are a huge statement on their commitment to Liverpool and their confidence in the ongoing regeneration of the city.”