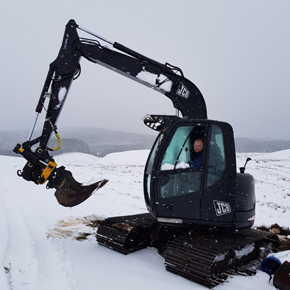 The hills are alive with Engcon

Scotland’s largest Engcon dealer, JCC Group, fitted the tiltrotator for farmer John Chambers, who said his main reason for purchasing one was for digging open drainage on his hill farm.

As vast amounts of his land is very soft and highly unstable underfoot, his decision as to whether to buy a tiltrotator was made a lot easier. 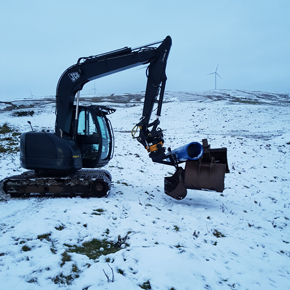 “I’m mostly in situations where just doing one pass with the machine is best. I need to be static, yet still able to use my excavator and Engcon tools to their full potential, to dig the drains to the correct levels and dress off any spoil without any excessive manoeuvring with the machine,” John said.

“I also have a post chapper which originally worked off its own tilt ram, but had no rotate. Now, due to Engcon, it has, and it’s given me far greater potential and use for it.

“I also use the forks as another add on, which has been amazing combined with my tiltrotator. I can put pallets and other objects in places I never thought possible.”

John described it as ‘a fantastic investment’ and said he couldn‘t see himself without it now. 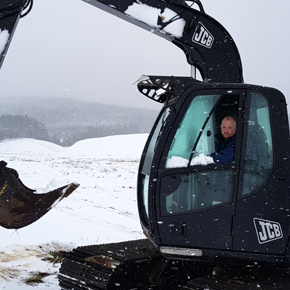 Robert Hunt, Managing Director of Engcon UK said the company endeavours to provide the very best solutions for its customers, using John as an example.

As somebody who works in a challenging environment, well off the beaten track, John has to be safe in the knowledge his equipment is of supreme quality, versatility, reliability and safety.

“Agriculture and land management is a growing market for us, where high productivity is vital, and we’re seeing a lot of interest from the sector,” Robert said.