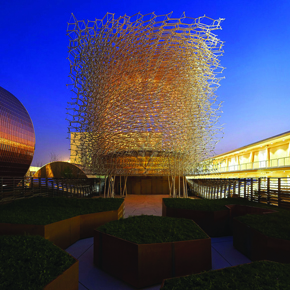 The Hive comes to Kew Gardens

The centrepiece of the award-winning UK Pavilion at the Milan Expo, The Hive, has a new home at Kew Gardens. The UK Trade & Investment (UKTI) and the Royal Botanic Gardens, Kew have announced that the structure, which is an immersive, multi-sensory experience inspired by UK ground-breaking scientific research into the health of bees, will open to the public this month. ABC+D finds out more…

Soaring 17m in the air, designed by Wolfgang Buttress and created by BDP, Simmonds Studio and Stage One, The Hive is an immersive, multi-sensory experience inspired by groundbreaking UK scientific research into the health of bees.

Showcasing British creativity, innovation and leadership in overcoming global challenges, this magnificent aluminium structure will draw visitors into the space via a wildflower meadow, as though they were worker bees returning to the hive. The wildflower meadow will serve to build understanding and appreciation of these habitats and their significance for insect pollinators.

Hundreds of glowing LED lights bring this 40 tonne lattice structure to life, while a beautiful symphony of orchestral sounds fills the air, with an atmospheric undercurrent of buzzes and pulses. Triggered by vibration sensors within a real beehive, the sound and light intensity within the pavilion increases as the energy levels in the living hive surge, giving visitors an incredible insight into the ever moving life of a bee colony.

As visitors wander through this continually changing space, they will begin a journey, exploring the vital role of bees and other pollinators in feeding the planet – of the 100 crop species that provide 90% of food worldwide, 70 are pollinated by bees.

Crucial links between food security and pollinators will come alive as Kew scientists share their solutions for pollinators under pressure, from their research into the plant chemicals in pollen and nectar that enable bees to overcome disease to the development of high quality wildflower seeds by Kew’s UK Native Seed Hub. 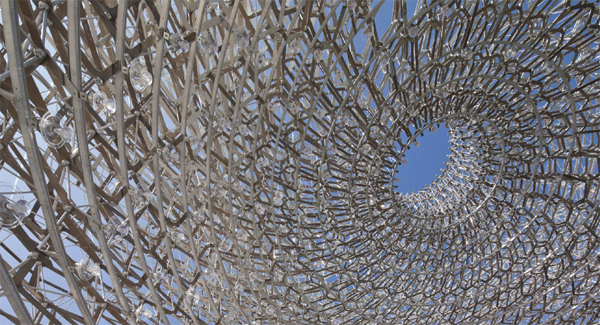 Richard Deverell, director of Royal Botanic Gardens, Kew said: “We are truly delighted to announce The Hive’s move to Kew, both for its magnificent aesthetic appeal and for the resonance it has with our work – I can think of no better home for this remarkable marriage of architecture and science. ‘The Hive creates a powerful, immersive space for us to explore the urgent issues we face in relation to pollinators, their intimate relationships with plants and their vital role in helping us feed a rapidly growing population. To be able to bring those stories alive here at Kew – a centre of scientific knowledge and expertise, and one of the planet’s most biodiverse city landscapes – is a true honour.”

Lord Maude, Minister of State for Trade & Investment, said: “The UK Pavilion at the Milan World Expo 2015 was an outstanding success. It was visited by over 3.3 million people in just six months, with a further 450 million people viewing it across the world’s media and online, and it received multiple awards including the Expo’s gold medal for best architecture and landscape design.

“Our business legacy is already secured with over £800m in business wins from the global Grown in Britain & Northern Ireland business programme. As a physical legacy, it is fantastic that more of the UK public will have the opportunity to experience The Hive for themselves in the perfect setting at Kew. The Expo focused on sustainable ways of feeding a growing global population while protecting our environment: I cannot think of a better home for it now that the Expo is over.”

Lord Gardiner of Kimble, Lords Spokesman for the Department for Environment, Food and Rural Affairs said:

“Pollinators, like bees and other insects, are integral to our natural environment and play a vital role in our food industry. The Hive is an extraordinary structure which symbolises how the UK champions the protection of bees and nature. I am delighted to see it make a return to the UK at Kew, where it will continue to amaze the public and raise awareness of how vital pollination is.”

To reflect the Expo 2015 theme of Feeding the Planet, Energy for Life, the UK Pavilion highlighted the groundbreaking UK research into pollinators, principally the bee, and their role in the global food chain. This includes research by renowned scientist Dr Martin Bencsik, who has been conducting pioneering research into bee vibration and communication patterns.

During its time in Milan, the Hive structure proved a huge success, attracting millions of visitors and winning the gold award for architecture and landscape. It became a powerful symbol of UK strengths in innovation, creativity and global leadership to a worldwide audience, while helping to drive exports and attract international investment. 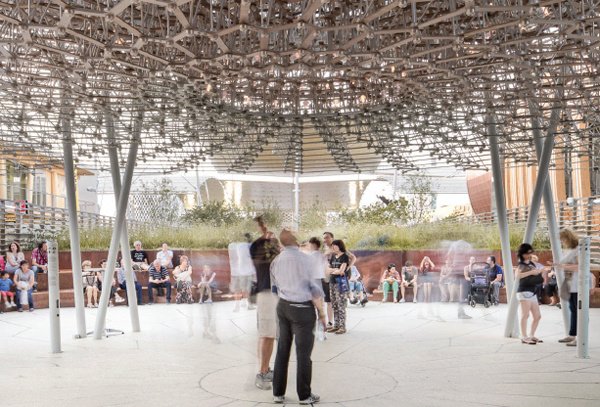 Pollinators are an essential part of the UK environment and play a crucial role in food production, which is why a priority for this Government is protection to help bees and other pollinators thrive. You can read more on the National Pollinator Strategy at here.

The Hive has won the following awards: 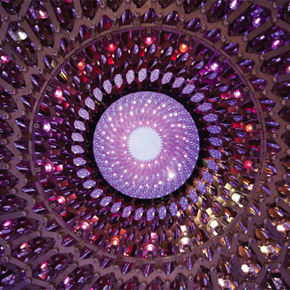 Royal Botanic Gardens, Kew is a world-famous scientific organisation, internationally respected for its outstanding collections as well as its scientific expertise in plant diversity, conservation and sustainable development in the UK and around the world.

Wolfgang Buttress creates sculptures which seek to define and celebrate a sense of place. His work alludes to histories, traces and memories, which are both personal, contextual and aim to express the sublime. The artworks establish a connection to something timeless and elemental. Increasingly, he has drawn inspiration from nature, collaborating with experts to explore and interpret scientific discoveries.

Wolfgang has created and exhibited artworks in the UK and internationally. His awards include the Japanese Kajima Gold Award for Space (2014) and the Structural Steel Award for projects under £2m (2013). More recently, his UK Pavilion design created for the 2015 Milan Expo was awarded the BIE gold award for Best Pavilion Architecture and Landscape.