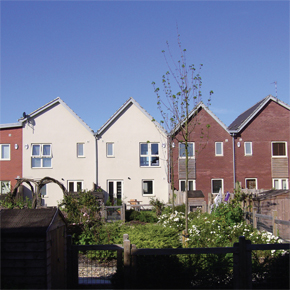 The increasing risk of overheating in homes

The recent CIBSE Technical Symposium explored a number of issues relating to the performance of buildings now and in the future. William Wright of the Building Research Establishment highlighted the increasing risk of overheating in homes and here outlines the argument presented in his paper… 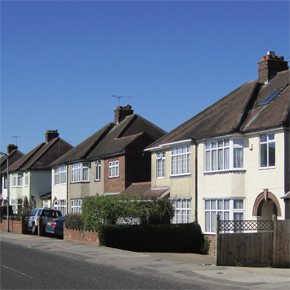 Overheating has been identified as a problem by the Chartered Institution of Building Services Engineers (CIBSE), the Zero Carbon Hub and the NHBC Foundation.

The occurrence of overheating can be difficult to define as the occupant experience is subjective. For domestic buildings CIBSE Guide A recommends a temperature limit of 26°C in bedrooms. For non-domestic buildings, however, Guide A gives a more precise definition of overheating. This definition can be used with thermal modelling software to determine whether overheating will occur in a space. However, a more general approach might also be used to consider a building’s resilience to overheating events.

Building fabric insulation improvements and increased fabric airtightness have exacerbated the risk of overheating in dwellings without sufficient ventilation. The risk is compounded by an increase in numbers of apartments being built; because these tend to be built to smaller dimensions, single aspect, highly glazed and in high densities, this makes heat dissipation more of a challenge.

At the same time, while the building envelope is increasingly better insulated, ambient temperatures are rising as the result of climate change. According to CIBSE’s future climate data, based on Met Office climate projections UKCP09, even a medium-low increase in emissions over today’s value can be expected to result in an average temperature increase of over 1℃ in London by the 2050s.

The factors which lead a dwelling to overheat include:

High ambient air temperature: When using weather data to assess overheating risk it is important to use appropriate regional data files to reflect the uplift in ambient temperature for urban areas, particularly those areas where the urban heat island effect is significant.

Solar and internal heat gains: Solar gains can be controlled by blinds or shutters. Internal gains come from people and appliances, which are harder to control. In addition, communal heating systems that run year-round to supply hot water have also been found to contribute to severe overheating in some apartment blocks.

Insufficient natural ventilation: In most homes natural ventilation is the primary mechanism for heat rejection. To be effective, windows must be sized to ensure the ventilation rate is sufficient to offset the rate of heat gain. However, even where windows are sized appropriately, in some urban dwellings it is often impractical to open windows because of security, noise and pollution concerns.

Undersized and poorly maintained mechanical ventilation systems: If mechanical ventilation systems are to be effective at removing heat they must be sized to provide sustained purge ventilation rates, which will require a larger system than one sized simply to maintain air quality. The degree a building will overheat can be estimated using building energy simulation models. In fact, CIBSE is currently working with an industry panel to produce an overheating assessment methodology for homes based on a dynamic thermal simulation. For this study, however, we used a modified version of SAP Appendix P – the regulatory risk calculation tool. 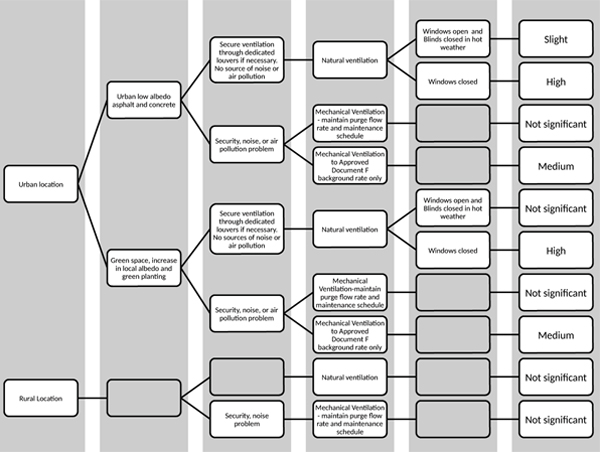 The study has enabled BRE to produce an indicative decision tree (above) for a top floor apartment, situated in the Thames region, which has been built to the requirements of the Building Regulations for England 2012. The apartment has a floor area of 60m2 and incorporates windows sized to 25% of treated floor area which are aligned east-west.

The decision tree approach shows that the risk of overheating can be considered throughout the design and build process. It also shows that an urban location is a significant factor in determining whether a building will overheat. This decision tree also shows that there is a clear break point between natural and mechanical ventilation, which can be influenced by concerns of noise nuisance, air pollution or security concerns. Where there are external factors which might prevent occupants opening the windows, developers should be prepared to provide adequate mechanical ventilation.

Finally, it may be difficult for occupiers to make an instinctive connection between closing blinds, opening windows and overheating, because there may be a time lag in the effects of these, or because different strategies may be needed at different times. There are definite benefits to developers engaging with occupiers on how to operate their building to best effect.

Read the full version of the paper