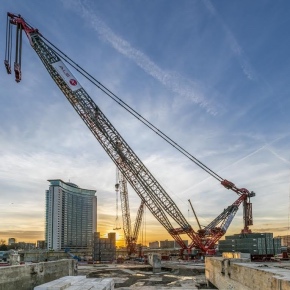 The largest crane in London towers over Earl’s Court

A one-hundred-and-twenty metre tall crane has been erected in the UK capital to start lifting the concrete beams which supported the weight of the Earl’s Court exhibition centre above the London Underground lines.

The old exhibition centre has been demolished to make way for an 8,000 home development from Capital and Counties Properties, as well as a new high street and five-acre park.

Designed and manufactured by ALE, the AL.SK190 crane’s base is approximately the size of two football pitches, and its stature makes it the biggest crane in London.

The crane has a lifting capacity of 4,300 tonnes and is only permitted to work late at night. Minimal flood-lighting will be required, as the crane operates through pre-programme movements and utilises precision lifting technology to minimise the impact on local residents, reduce the project’s carbon footprint and reduce the project timescale.

ALE sales manager Giovanni Alders commented: “Operationally, this crane can perform lifts previously unachievable and reinforces the innovation seen throughout the whole project. We are looking forward to progressing with the project and executing the first lift.”

Capco group development director Mike Hood added: “We are making good progress at Earls Court to prepare the site for future development. The heavy lifting crane is the most visible part of this work and will be part of the London skyline for the next year.”