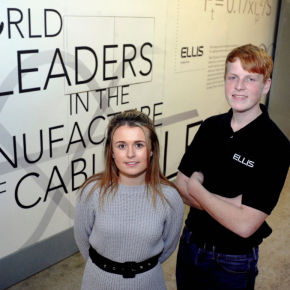 The manufacturers apprentices with Ellis Patents

The world’s leading cable cleat manufacturer, Ellis Patents, has signalled its commitment to developing young careers in Ryedale, by taking on two apprentices to work in key areas of the business.

The Rillington-based company, which has distributors in 39 countries and actively exports to over 40, has appointed Adam Shaw, aged 17, as an apprentice machinist, and Jade Greenwell, aged 19, as an apprentice general office assistant.

Adam, who comes from Haxby in York, is working towards becoming a Level 2 qualified welder and a Level 3 machinist; while Jade, who lives in Rillington, is following her mother, father and uncle in building her career at Ellis. She is working towards both Level 2 and Level 3 business administration qualifications.

Richard Shaw, MD of Ellis Patents, commented: “We take great pride in developing careers for young, local people and our intention with Adam and Jade is to give them the very best start to their working lives, and we do hope that once finished and qualified they will choose to stay and grow with us.”

Ellis has a rich tradition of bringing on apprentices, with its toolroom being a prime example of the benefit of this approach.

In addition to current apprentice, Adam, three of the full-time team began life at Ellis as apprentices; while the fourth, tool room manager, Mark Angus, has carried out an apprenticeship prior to joining Ellis.

He graduated with a 1st class honours degree in 2018 and is now a key member of the product development team, which this year alone has launched an innovative twist foot fitting mechanism for its Emperor and Vulcan+ cable cleats that will save time and money for installers; and redesigned its popular cable hangers so that they are not only stronger, but cheaper to buy.

Richard added: “As a business we have a global reach and a reputation to match. But at the heart of all our success is the fact we are still very much a local business staffed by a predominately local work force; many of who kick-started their careers at an early age with us and have gone on to really make their mark.”