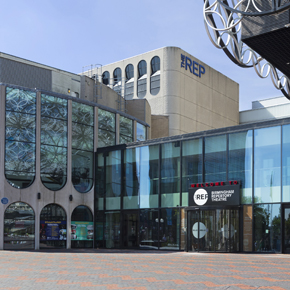 ‘The Rep’ theatre in Birmingham gets new glazed entranceway

GEZE UK and Glassolutions have undertaken a joint glazing project at the Birmingham Repertory Theatre to create an entranceway to its three auditoriums on Centenary Square.

The Birmingham Repertory Theatre (‘The Rep’) is part of a greater transformation and redevelopment scheme in Birmingham.  The outward-looking arts and entertainment venue has recently benefitted from a new 300-set auditorium alongside its main stage and studio, placing new demands on the building, as well as increased traffic.

The Rep previously shared an entrance with the Library of Birmingham, created as part of a £188 million redevelopment in 2013, but has since requested its own entrance that would provide direct access from Centenary Square.

GEZE UK worked together with Glassolutions to create a circular sliding door, combining accessibility and aesthetics, for the 170,000 visitors that turn out every year.

The circular door, powered by a Slimdrive SCR automatic operator with 360° drive mechanism, sits across the 3,800mm entrance, and is engraved with ‘hello’ and ‘cheerio’ to signal entrance and exit.

The entrance enables a large number of people to enter through the lobby at any one time, whilst creating an effective draught lobby that minimises heat loss and gain.

GEZE’s Slimdrive range also played its part in the creation of a second entrance to the theatre’s Marmalade Bistro and Bar.

The company supplied a pair of automatic swing doors operated by Slimdrive EMD-fs installed street side, and a single sliding door powered by Slimdrive SL NT automatic operator inside to create a further draught lobby.

All units within the Slimdrive range feature a height of 7cm and can therefore be discretely installed so they are virtually invisible to customers. The automatic operators are BS 8300 compliant and assist with the demands of the Equality Act.