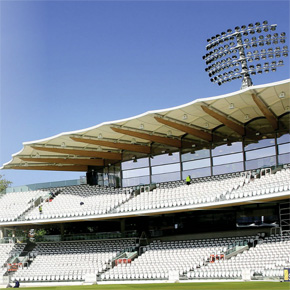 The Warner Stand: A new generation of cricket hospitality

A ground as famous as Lord’s needed world-class facilities to be a showcase for the largest cricket events. In August 2015, work began on bringing the Warner Stand up to the exacting standards of the Marylebone Cricket Club’s patrons – and the global cricketing community. ABC&D Magazine finds out more…

Lord’s Cricket Ground is a venue steeped in tradition. Established in 1814, it is widely regarded as a cornerstone of cricket. The Warner Stand, which was first completed in 1958, was a favourite with members.

However, in later years, the stand suffered from poor viewing angles due to shallow inclinations, especially on the lower tiers, exacerbated by the subsequent construction of the Grandstand.

Aims of the Warner Stand project

The primary aim of the project was to improve the stand’s sightlines, while building new hospitality suites for patrons inside. There was also a specific architectural requirement to allow patrons in the new restaurant, housed within the stand, to feel connected with the events going on outside.

It was also crucial to bring the match control facilities up to the world-class standards, to allow the ground to host some of the world’s biggest matches. 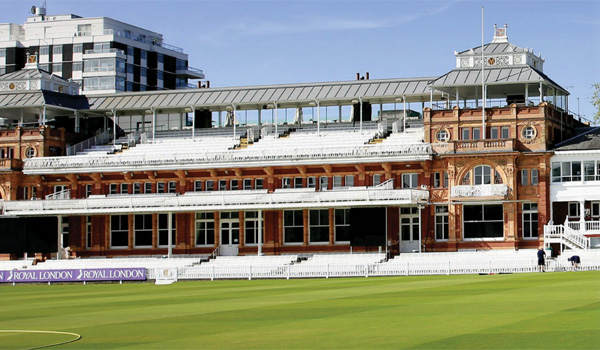 All of this needed to be achieved within an architectural frame, which complemented the existing aesthetics of the ground. The ground is not a stadium, and there was no desire to make it one: instead, each stand needed to maintain its own identity and character.

The initial challenge was to ensure minimum disruption to scheduled matches at the ground. To overcome this, the project was split into two phases.

The first phase began in August 2015 and ran for 41 weeks, including the construction of the basement levels and the two terraces, minus the roof. Phase one had to be ready to accommodate patrons for the 2016 test matches against Sri Lanka.

The next challenge was to ensure optimum sightlines for those seated in both the lower and upper levels of the stand. To address this, Arup took a unique approach, building the stand on two radial grids to create a greater curvature on the upper tiers, integrating these two radial grids proved a complex task, solved via carefully threading columns through the building to avoid complex and expensive transfer structures.

There was also a requirement for the interior of the restaurant to feel connected with the outside world, yet also have the insulation qualities to ensure patron comfort. Furthermore, the design needed to ensure aesthetic continuity between the internal roof and the covers of the seats outside.

The answer lay with Tensotherm, a fabric made of aerogel sandwiched between PTFE. This has the insulation qualities required to meet Building Regulations, while appearing translucent. Client fears over sound were allayed during planning, as they were invited to Arup’s SoundLab, where the exact acoustic qualities of the roof could be simulated.

The fabric roof is supported on an array of American white oak (AWO) glulam beams. AWO was adopted in the design due to its inherent durability, strenght and stiffness, which allowed the team to minimise the beams depths. It is the first use of AWO glulam of this scale in Europe and was only made possible via extensive testing and newly-developed fabrication processes.

The new and improved Warner Stand now houses all the facilities you would expect from a world-class cricket stand. Set over four levels, the upper level contains a luxurious new restaurant. There are then two terraces of seating, while the third floor provides a multi-purpose concourse and bar. 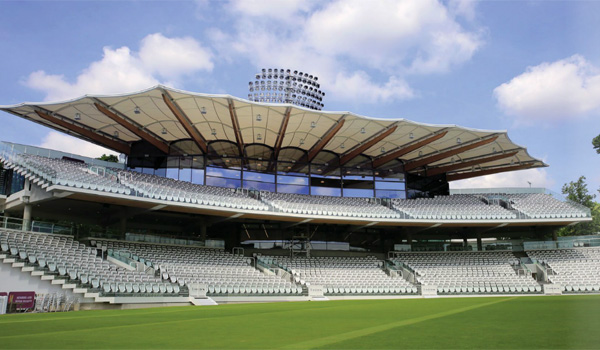 The stand is air-conditioned and heated, and therefore will be used year-round for events and conferences. The lower floors contain the essential upgraded match control facilities, which now meet the diverse and exacting requirements needed to manage the ground safely.

The stand is air-conditioned and heated, and therefore will be used year-round for events and conferences. The lower floors contain the essential upgraded match control facilities, which now meet the diverse and exacting requirements needed to manage the ground safely.

The stand also meets the Marylebone Cricket Club’s ambitious sustainability objectives. No fossil fuels are used in the new stand. Instead, an all-electric solution achieves significant energy savings across all systems, including heating, cooling and cooking. An open loop head pump system linked to two boreholes, drilled deep into the aquifer, sits at the heart of the building.

Most importantly, the sightlines and match control suite are vastly improved, cementing Lord’s Cricket Ground’s place at the heart of world cricket, and reasserting itself as a world-leading venue.