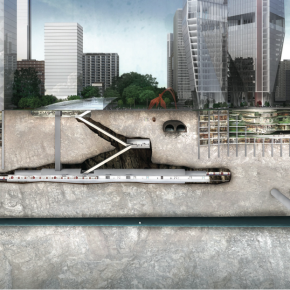 Think Deep UK is set to unearth challenges and opportunities for urban underground space use, in the latest issue of ABC+D Magazine.

The underground plays a significant role in our everyday life that we are often unaware of. Not only do we rely on the bearing capacity of the ground to support our buildings and to provide groundwater to supply cities with fresh water, we also use the ground beneath our cities to develop property, move goods and people and extract materials and heat. All these functions and services remain largely unseen and, therefore, are often unrecognised.

Creating an evidence base

To date, underestimating the multiple interests in urban underground space, as well as it’s role in tackling the major societal and environmental challenges of our time is insufficient.

Think Deep UK (TDUK), a newly formed group of built environment experts, now sets off to create a broad and wide-ranging evidence base and a platform for discussion about the urban underground.

The group was launched in February 2017 and aims to bring together professionals from multiple disciplines to create a common understanding of problems faced when planning, managing or protecting the structures and environmental functions associated with underground space.

Are we missing opportunities because in the current system a first-come-first- served approach prevails? How could cities be transformed by using the space underneath them differently? What action is needed to realise the socio-economic benefits that may be delivered through smart use of underground space?

To answer these questions and unlock the potential of a more comprehensive vision for the urban underground, TDUK will create a series of workshops, the results of which shall be available as a public resource.

Innovative workshop environments will enable communication across the full range of professions involved with cities and the spaces beneath them. The workshops will inform other initiatives to further the integration of subsurface in industry, research and politics.

“Think Deep UK aims to uncover the opportunities we will miss if we don’t start recognising the contribution of the underground to our daily wellbeing.”

Human interventions in the subsurface leave a legacy. Ground hazards in former mining areas, or management of rising groundwater levels following industrial decline are just two examples of the enduring issues that must be managed in combination with current use of the underground.

In addition, conflicts of use can emerge where several functions require the same space. For example, deep foundations and basements can influence groundwater flow and tree roots can affect utility lines.

In urban areas, congestion of the shallow layers (mainly with utilities) causes difficulties for accessing deeper levels which can, in-turn, make further development of underground space for public infrastructure or private development impossible.

Take London for example, where the construction of a new underground railway requires demolition of buildings in order to access available underground space. The final alignment of the Crossrail tunnels, which weaves past 42 existing tunnels was, therefore, significantly influenced by existing foundations and utility structures.

The activities of TDUK are topical. In recent years, the need to acknowledge the underground for spatial planning considerations has been increasingly recognised in various European countries. For example, a national register for subsurface structures was established in the Netherlands in 2015. In the same year, Switzerland introduced a new law on spatial planning in which sustainable use of underground space is promoted.

Examples for a growing awareness in the UK include Glasgow’s new city development plan, which is currently under development and will explicitly recognise the environmental and economic value of the subsurface.

Glasgow City Council is completing case studies to understand how subsurface knowledge can be used to inform Ldp policy and new spatial planning approaches and guidance. The British Geological Survey is working closely with Glasgow and other cities in the UK and internationally to ensure that subsurface data is embedded in the planning process and used to inform urban design and development.

Let’s not miss the chance

Although there are some excellent examples of how underground spaces beneath our cities can be used, the knowledge about our urban resources is not sufficiently shared. In the face of global challenges like population growth and climate change, Think Deep UK aims to uncover the opportunities we will miss if we don’t start recognizing the contribution of the underground to our daily wellbeing, particularly in urban areas.