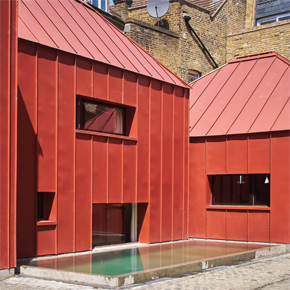 A newly-constructed residence in London has been named as a finalist for the RIBA National Award. The home and office residence has been dubbed the Tin House and was designed by award-winning architect, Henning Stummel. ABC+D discovers more… 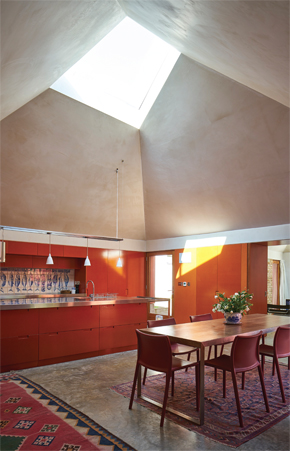 The Tin House is one of only 20 other buildings to be named a finalist for the RIBA National Award and will be featured on Channel 4’s Grand Designs: House of the Year programme. The winners will be announced later in the autumn.

The Shepherds Bush site is set away from the street with the surrounding properties overlooking it, therefore ensuring privacy was most critical. Henning Stummel Architects’ response was to work with a low and inward looking courtyard arrangement which presented the greatest privacy, both visually and acoustically.

Comprising six interconnected pyramidal pods, the roof and façades of the Tin House were constructed using colour coated steel. All the pavilions are finished in an earth-coloured standing seam metal cladding which creates a modest utilitarian finish that highlights and accentuates the monolithic, sculptural quality of the design.

The design is a composition of mainly single-storey pavilions which allowed the architect to respond to the differing conditions around the perimeter, creating an ensemble that looks onto a secluded and serene courtyard. Each pavilion accommodates a room and has a roof that slopes on all four sides with a top light over the centre.

This shape reduces the contour, while maximizing the volume. The top light also floods natural light into each room. The roof-lights can be opened and, on warm days, the stack-effect ensures that fresh cool air is drawn in from above the pool. The Pantheon and the work of James Turrell have influenced the design of the top lit pavilions.

Secondary spaces such as toilets and stairs are hidden within the capacious double walls of the links between pavilions, so that the final design reads as an enfilade of generous top lit spaces. The pavilions are gently moulded to make efficient use of the site. 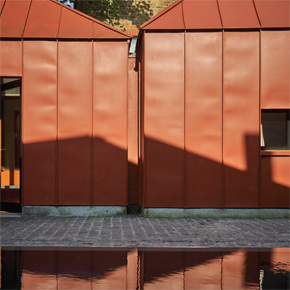 A rectangular pool of water allows for condensation cooling and the sun’s reflections from the water bring the façades to life.

As you move through the building the layout provides ever changing vistas and views, the geometric forms accentuated by the simple utilitarian finishes. The brick fireplace mirrors the entrance gateway in its scale and texture and acts as a touchstone at the heart of the composition, grounding the house around the hearth.

The pavilions are super-insulated (250mm of PU foam) and relatively airtight and a heat-recovery air system ensures energy efficient ventilation throughout the colder months. Full of inventiveness, the cleverly detailed thick walls incorporates the services.

According to the RIBA panel: “The house has a beautiful balance of delight and is obviously an uplifting and practical place to live. The judges were all equally moved, delighted and inspired by this unexpected back-land jewel.”