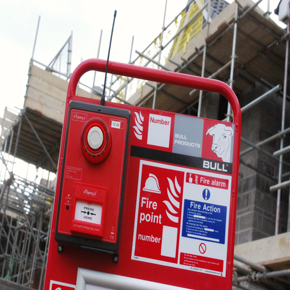 Bull Products have created a wireless fire alarm system for specific use on construction sites where changing conditions and environments demand a higher performance.

The Cygnus wireless alarm system has many features and benefits, the top five including it being suitable for large scale developments, as it is able to link 480 individual units in 15 different zones and an optional control panel, which records events such as alarm activation, low battery warning and signal faults.

Other benefits include Cygnus interfacing with other systems, including turnstiles, lifts, door release and monitoring systems, sending an alert to personnel off-site using PIR sensors if an intruder is detected and the ability to use on multiples sites within close range of each other, providing a cost-saving, reliable system.

Rigorously tested to offer the ultimate in performance and reliability, the Cygnus system has raised the bar in the industry, and is the most successful and adaptable temporary fire alarm system for use in the construction industry.