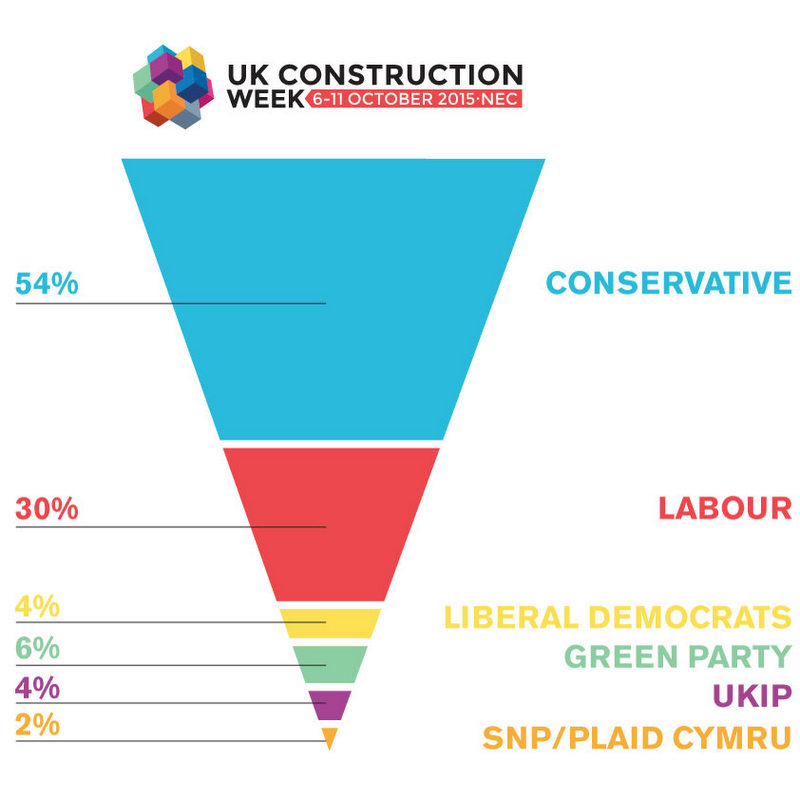 The Conservative party has taken the lead in a pre-election opinion poll conducted by UK Construction Week, despite 71% of respondents claiming that the needs of the construction industry have been ignored by the key political parties.

The overwhelming majority replied that they do not feel the interests of the industry have been addressed by the election campaigns, with only 29% stating that construction has received adequate political attention.

When asked which party would be best for the industry if it comes to power:

Despite the positive indication for the Conservatives, the survey also appeared to reveal a desire for political change.

When asked to look more closely at the policies they feel would positively benefit the industry, two key themes emerged: house building and skills.

The Help To Buy programme was overwhelmingly highlighted as the most important recent initiative in boosting construction industry growth, receiving 67% of the vote.

The coalition government’s flagship energy efficiency programmes rated low at with the Green Deal at 9% and the Energy Company Obligation just 5%and key sustainability programmes the Renewable Heat Incentive and Feed In Tariff each received just 4%.

Qualitative responses to the research appeared to add weight to these results, with numerous respondents pointing to the need for greater support for the house building industry and the provision of more affordable homes.

Policies they would most like to see include in manifestos:

Richard Morey, Group Events Director at Media 10, the event company producing UK Construction Week: The survey results are interesting because they appear to show that the industry feels let down by the main political parties.  Despite the fact that construction has been the main driver behind the UK’s economic recovery, the needs of the industry have been given very little attention in the run up to the election.

The results have highlighted that while there are some very clear issues to be addressed  such as house building and skills shortages  it will be down to the construction industry itself to rise to these challenges, without much political support.  For these reasons, it is vital that the industry takes charge of its own future and we hope that by providing a platform and space for this at UK Construction Week we will be able to help make this a reality.

Bringing together nine shows under one roof, UK Construction Week will be the biggest construction trade event the UK has seen in years.  Taking place at the Birmingham NEC from 6  11 October (with the trade only days from 6  8 October) the event will unite 1,000 exhibitors with an expected audience of 55,000 visitors.