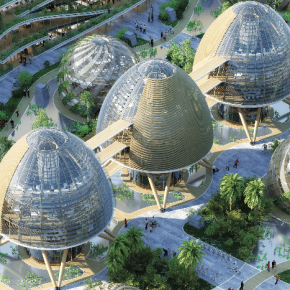 Built between 1902 and 1907, Tour et Taxis was originally a large customs clearance and storage complex, located at the river, road and railway gates of Brussels, now Europe’s capital city.

It lost its way with the progressive lifting of Europe’s custom borders, but the Tour et Taxis neighborhood is currently undergoing a major renewal, and is once again on the verge of becoming an important vehicle for the economic and cultural development of Brussels, bringing in a sense of well-being and community.

Where most developing countries can write their future starting from a blank slate, European cities face the challenge of transforming their built heritage to secure their energy, social and economic transition towards post-carbon, circular and interdependent urban living.

It means being determined to act as forward thinkers and, to bring our new project, Tour et Taxis, into the 21st century, in terms of use, technological progress, social innovation and sustainable building principles.

Today’s architecture is capable of implementing energy solidarity between a piece of architectural heritage – industrial in this case – and a contemporary project. The latter provides the necessary energy to the former by integrating renewable energies, thus limiting carbon emissions as recommended by the COP 21.

Covering 40 hectares of former wetlands, this industrial park is a worldwide symbol of industrialization’s golden age in terms of its engineering, ironwork, stonework and natural light. The warehouses and sheds have been repurposed with corporate sustainability and the economy in mind, dedicated to energy saving and the reuse of renewable energies. 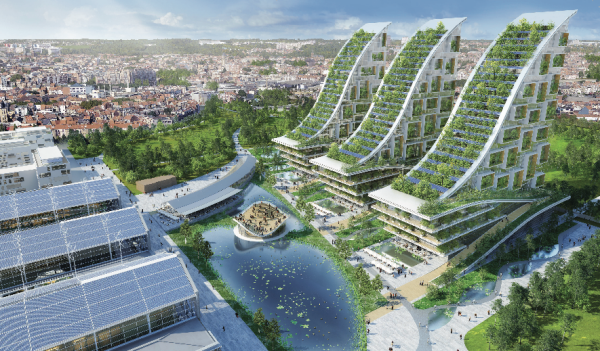 The ultimate goal is to create a genuine mixed-use eco-neighborhood where it is pleasant to be, work, live and play; an eco-neighbourhood along the Brussels canal, articulated around three axes: revitalisation of the built heritage, sustainable communities, and water.

This redevelopment is combined with the creation of a bridge for public, non-motorised and shared transportation that will link the Rue Picard on the south of the site to the Gare du Nord train station.

The project focuses on the metamorphosis of the Gare Maritime (Marine Terminal) into 50,000m2 of mixed-use space, composed of offices and workshops, retail space and public amenities. Across from the pediment of the Gare Maritime, the project also includes the eco-design of three residential vertical forests totalling 85,000m2, as well as the creation of a large pond bordered by a natural and biological pool which links the Tour et Taxis park to the Brussels canal.

The metamorphosis of the Gare Maritime

The Gare Maritime is large and majestic, divided into five parallel iron, cast iron and glass vessels. These days, it sits empty and is one of the largest terminals in Europe, with a floor area of 40,000m2.

In his time, Frédéric Bruneel, the railways’ chief engineer, decorated it like an Art Nouveau masterpiece, with wrought iron and stylized vegetal forms that still adorn the pillars and arches today.

Our concept proposes to bring the new public park and the canal inside the Gare Maritime along the 280m length of its naves, creating a genuine Biocampus where it feels good to work and relax.

The two median naves are thus innervated with vegetation and water. These interior gardens – tropical to the east and continental to the west – climb along the façades of the various functional spaces, forming cascades of exotic and endemic plants.

Biomimetics inform the various styles of contemporary architecture, their shape and structure, as well as the biosourced materials used according to flexible and modular construction principles. Contrasting with the wrought iron
of the five naves facing it, the BIOCAMPUS is built in solid wood and cross-laminated timber (CLT) to reduce the intrinsic carbon footprint of the construction, while bringing warmth and comfort to the microclimatic interior landscape.

The spatial organization of the BIOCAMPUS aims to promote innovation, co-working and the circular economy of this early 21st century, based on the Triple R theory: Reduce, Reuse, Recycle.

The BIOCAMPUS establishes an individual architectural identity for each of the five naves – enhancing the industrial heritage while guaranteeing visual permeability between the large three main naves:

All the co-working, e-business and e-sharing spaces can be allocated to multiple long-term businesses, or be turned into a start-up cluster.

The interior space planning is flexible and easily adjustable, thanks to raised floors pre-installed with plumbing, HVAC and NICT. They only use biosourced materials that are recycled and/or recyclable according to cradle-to-cradle standards.

Self-sufficient, the Gare Maritime provides 86% in value-  added energy that can be redistributed in real time to the neighboring historic buildings and future sustainable housing units across from it.

The eco-concept of vertical forest and sky villas (Zone B)

Zone B faces the northern pediment of the Gare Maritime, and is dedicated to the development of 85,000m2 of multiple-scale housing units as well as convenience stores.

The concept of the Vertical Forests is to build Sky Villas surrounded by vertical gardens, i.e. individual homes with private food gardens and community orchards high in the Brussels sky, thus combining the advantages of both rural and urban living.

This vertical village concept addresses the increasingly obsolete geographical segregation between one’s private life in the countryside and professional life in the city. It challenges the car-centric culture of the 20th century, and reinstates the notion of a pedestrian city focused on ecomobility. Less time wasted in one’s car means more time for oneself.

The project takes advantage of the trapezoid-shaped area bounding the construction zone. Large rooftops with elegant curves outline fruit and vegetable corbel balconies, with unparalleled views of the Brussels historic core and the Koekelberg basilica.

Tilted south, these rooftops are covered with solar panels (12,500m2) that provide some of the housing units’ energy needs.

The three vertical forests total 85,000m2, and are divided from east to west into three lots of roughly 32,500m2, 28,000m2 and 24,500m2 respectively. These forests align along the width of the Gare Maritime, and are separated from each other by gardens that are 35m wide.

To the south, the height of the towers does not exceed 24m, thus aligning with the ridges of the Gare Maritime’s three large naves. To the north along the future Avenue Tour et Taxis, their height reaches 100m on over 30 floors, with panoramic views of Molenbeek, Laeken, and the Atomium further away.

This urban complex connects the large esplanade located north-east of the Entrepôt Royal (Royal Warehouse) with the park created to the north-west on the old rail forks’ trail. The lilypad sets a double vanishing point: for the perspective from the Gare Maritime’s central nave on one side; and for the perspective from the bridge coming from the Gare du Nord train station on the other side.

Each master plan zone is thus stitched to the other like an avant-garde TEGPOS (Positive Global Energy Territory), as a symbol for the desired perfect symbiotic relationship between man, technology and ecosystems.

Metamorphosis doesn’t mean eradicating the past, but rather integrating the best of the past into our future; selecting which components of the past will form the foundations of a future still to be imagined.

The role of architects extends beyond mere conservation or restoration: it involves advocating for a hybrid history.