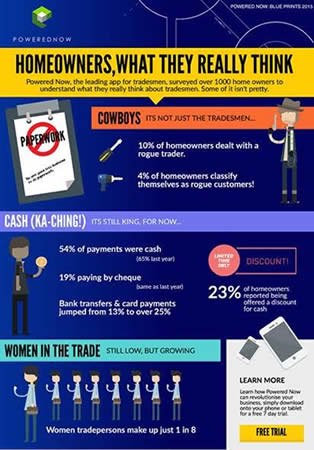 4% of those asked classified themselves as ‘rogue customers’ for having paid late, missed appointments or deliberately avoided paying part of their bill.

There are many trade complaints about rogue customers, a topic which receives little coverage in comparison to that of rogue traders.

Although the survey revealed that 11% of those asked had encountered a rogue trader in the past 12 months, Powered Now managed to uncover a number of rogue customers, who were happy to admit their shortcomings.

The survey revealed that print-based media is being used less and less: only 11% of those asked claimed to use local papers, Thomson and the Yellow Pages, while 18% now opt for search engines to find trade companies.

Over 70% of homeowners, meanwhile, use recommendation or previous experience of tradesmen to make their decision.

50% of homeowners considered reputation as an important factor in deciding who to give work to.

Availability to start and a keen price were also seen as very important by around a quarter of those surveyed.

Meanwhile, the professional look of company employees was deemed essential by a small 15% of those questioned.

The survey also revealed that the number of women in the trade is growing: 13% of homeowners had enlisted the help of a female tradesperson to do work for them.

The survey revealed that there has been a huge rise in using bank transfers and payment cards to pay for work.

Although cash is still the preferred payment method of choice, it has suffered a 65% drop from last year’s survey. 23% reported that they had been offered a discount for cash.

59% claimed they would pay by card if they could.

The top irritation for two-thirds of homeowners was revealed to be missed appointments by tradesmen.

75% revealed that they were unhappy about how difficult it is to get a quote or an estimate after a tradesman’s visit; 76% complained that the final bill is often unexpectedly more than the amount quoted.

Meanwhile, 71% revealed that a professional-looking quotation makes them more likely to choose a particular company, citing poor paperwork as a key fault.

Powered Now has revealed how tradespeople can use these results to grow their businesses.

Doing good work must be made a priority, as the vast majority of business leads come from recommendation; final selection often depends on reputation.

Tradesmen should also make themselves available online and ensure that they can be found on Google.

An appointment should never be missed and a tradesperson should never be late at the risk of losing trust. It is also useful to create professional-looking quotations, which can be produced and provided quickly.