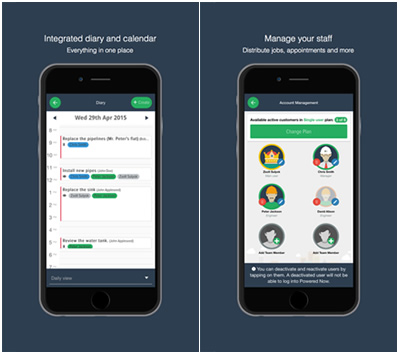 Improved to help tradesmen run their businesses with ease, the Powered Now app works on Android and Apple devices.

It allows tradesmen to carry out administrative tasks, such as booking appointments and preparing estimates.

Once information is entered, it does not need to be put in again; it can also be exported for use by book-keepers and accountants, reducing the amount of paperwork tradesmen have to contend with.

Powered Now offers a 7-day trial and a free edition, which provides all the features but no email, texting or postcode lookup

Powered Now’s third update has introduced a ‘Multi-user’ facility, which has been designed to ensure that the app can be used by an entire team, as well as individual traders.

Information can be shared between all team members; they can be assigned different roles, which allow them to see different parts of the software.

For example, engineers can be restricted from accessing the financial details.

Multi-user has been designed to allow for the easy management of appointments, paperwork and people. Companies such as Astley Access Automation have reported back, expressing their satisfaction with the facility.

Powered Now has also been developed to offer compatibility with Android devices. This means that engineers can be equipped with Android smartphones, which are cheaper to replace if they are broken, whilst the manager can control things via an iPad.

Once the data is shared across all devices, the loss of a device does not result in the loss of data.

The new software can be used to record the amount of hours spent on appointments; engineers can also use it to take before and after pictures of their jobs, make useful notes and capture customer signatures.