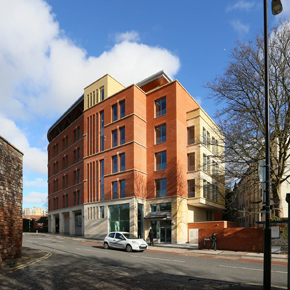 Simplyhealth House has been built to replace the company’s former leased premises, James Tudor House on Victoria Street, having reached capacity. The company chose the location for its new offices on the Whiteladies Road conservation area in Clifton, which overlooks the historic Downs. It had previously been the site of a derelict bank building, which had stood empty for some years.

Ferguson Mann Architects along with delivery architects Webb Gray & Partners worked closely with Bristol Planning Department and Conservation Officers in order to develop a suitable design which is modern, sustainable and environmentally friendly, in addition to being architecturally sympathetic to the built environment and heritage of the area.

The Architects said: It was very important to Simplyhealth to follow its mutual values and act responsibly towards its communities. The brief was therefore to design a gateway building, which would minimise carbon emissions and energy consumption, whilst using 99% recycled materials as well as renewable energy sources such as solar panels.

In terms of composition, the design of the new building was broken into three clearly defined and expressed parts, with the lowest adjacent to Harper House and the tallest on to Redland Hill. The varied roofscape, with its vertical tower, echoed some of the taller buildings that line the east side of The Downs, whilst the overall design and scale of the building respected the topography and the panoramic views.

The choice of external materials for the façade, which included ashlar natural stone and high quality handmade bricks, were key to the design in reflecting the urban character of the area. 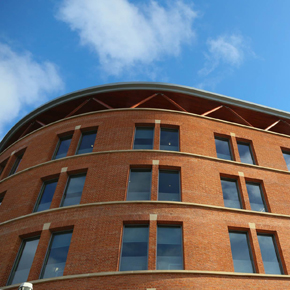 The Architect’s strategy was to create striking elevations, using an orange/red multi, which would bring life to the appearance of the building, particularly in the changing light. The concept drew inspiration from traditional 18th/19th century brickwork and also contemporary buildings, which use brick in a way that is modern with traditional references.

The brickwork sets the rhythm and character for the whole design and was important in creating and presenting an elevation, which was not in any way mechanical in its appearance, but had a subtle texture and variety.

The use of a stone colonnade at the base of the principal west facing elevation denoting the entrance and the set back veranda structure at the top also added a sense of dignity to the whole structure. In addition, the external envelope was designed with 300mm deep reveals to all window openings, to provide depth to the façade, which also contributed to part of the solar control strategies for the envelope.

Simplyhealth House now provides 52,000 square feet of office space. It is a modern, flexible and sustainable working environment for the company’s existing 430 employees based in Bristol.

Ian Thomas, Head of Business Services from Simplyhealth: We are extremely proud of our new building, which provides a much brighter and spacious open plan working environment for our employees in Bristol.  It’s a modern base for our private medical insurance operation and one which gives us the ability to expand in the future to continue to serve our customers.