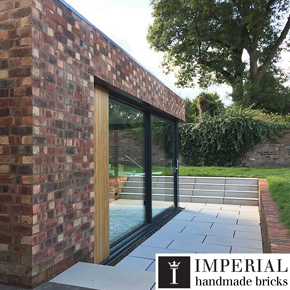 Imperial Bricks has added two new products to its range of 3” Pre-War Banded Wirecut bricks; a reclamation version of this popular style and a weathered option.

This comes in response to demand from architects, specifiers, developers and self-builders, with both new products being imperial in size, fully tested and frost resistant to BS EN 771-1 with sustainable supplies for ongoing projects.

“This is an important advantage over reclaimed bricks as it isn’t always possible to guarantee supply or quality,” says Jason Hughes, Managing Director of Imperial Bricks.

“The Pre-War Banded Wirecut brick is very popular, especially across Cheshire/Midlands/North and it works for renovations, extensions and new builds that require an instantly aged appearance.

“The new finishes will make it that much easier to match an extension to an existing building, or help a new build to blend in with surrounding buildings.”

The new reclamation style version is ideal for both new build and extensions, while the weathered version is especially suited to matching existing brickwork, particularly in urban areas.