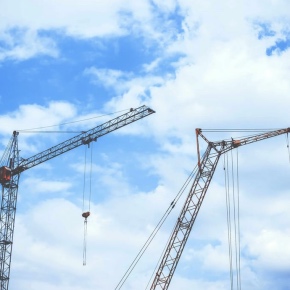 Growth in the construction sector beat expectations in February, as the Markit purchasing managers’ index rose to 52.5, up from 52.2, above forecasts that it would stay flat.

A solid upturn in civil engineering activity outweighed the slow-down in commercial construction, which contracted for the first time since October, and housebuilding, which cooled to a six-month low.

The construction industry has nevertheless remained positive as 48 per cent of companies expect a rise in business activity, with a strong demand for housing likely to boost output.

Senior Economist at IHS Markit and author of the Markit/CIP Construction PMI, Tim Moore, commented: “February’s survey data highlights that the UK construction sector has rebounded from its post- referendum soft patch but remains on a relatively slow growth trajectory. Weaker momentum in the house building sector was a key factor weighing on construction growth, alongside a renewed fall in work commercial projects.

There was little sign that the UK storms had a material impact on construction growth in February, although some firms noted that longer delivery times for roof tiles had added to supply chain issues. Instead, survey respondents mainly cited an underlying slowdown in sales growth, with the latest rise in new work the weakest for four months. In some cases, construction companies reported that sharply rising input prices had a disruptive impact on contract negotiations.”

Duncan Brock, Director of Customer Relationships at the Chartered Institute of Procurement & Supply added: “Suppliers were challenged this month as they groaned under the weight of higher demand and some material shortages, with the sharpest drop in performance since June 2015. This impacted on the sector’s overall pace of activity, as delivery times lengthened for bricks, blocks and roofing tiles.

Housing was singled out as a drag with its weakest performance for six months. As a previous driver of growth, there will be concerns about this softening of house building activity. The drop in sub-contractor availability was the largest seen since January 2016, against a backdrop of rising employment numbers across the construction sector, which will add to worries around labour market capacity as we move along the path to Brexit.

But overall, the sector’s optimism was still high as workloads remained strong, propped up by the prospect of new projects and repeat business.”

Industry response to the latest figures has been largely positive. Kelly Boorman, head of construction at RSM, commented: “The slight rise in the construction purchasing managers’ index in February underscores the confidence in the wider economy which has performed much better than expected since the EU referendum.”

Robert Grigg, Managing Director of Property Finance at Hampshire Trust Bank, also added: “Today’s figures are positive news for the construction industry and echo the sentiment of our recent SME Growth Watch Report, which found that half (51%) of SMEs in the construction sector are optimistic about their long term growth prospects.

While this is encouraging, greater measures need to be taken to support our construction industry, in particular SME housebuilders, as we believe these firms hold the key to boosting the level of housing stock in the UK.”