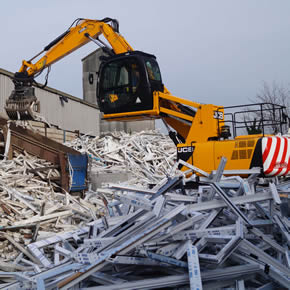 Last year, the UK contributed over 100,000 tonnes of PVC to the total amount recycled through Recovinyl, the PVC industry’s recycling scheme. This year, new recycling initiatives are being introduced to encourage further growth.

As an operational arm of VinylPlus, the European PVC industry’s sustainable development programme, Recovinyl aims to tackle the sustainability challenges of PVC.

PVC can be recycled up to seven times, without any loss of performance. It can be reused in a variety of new products, including windows, goalposts, flooring and electrical components.

PVC recycling in the UK

Recovinyl’s recycling success can be attributed in part to the growing demand from manufacturers for quality recycled material. Last year, over 500,000 tonnes of waste PVC was recycled across the scheme’s network of 163 companies.

21% of this total came from the UK, representing the equivalent of almost 4.3 million PVC-U windows. Waste PVC-U profiles comprised more than half of the UK’s recycling achievement in 2015; this year, the recovery and reuse of PVC is expected to grow, in line with Britain’s nationwide investment in recycling infrastructure.

Recovinyl intends to consolidate and increase the supply of PVC waste being recycled in Europe by creating a demand from the converting industry.

Meanwhile, the UK is introducing new recycling initiatives, such as the collection PVC gift cards and single-use waste PVC medical devices through RecoMed. Funded by VinylPlus, the RecoMed take-back scheme is now operational in seven hospitals across Britain; since 2014, it has recycled over 830kg of PVC waste.

The VinylPlus Voluntary Commitment aims to recover and reuse 800,000 tonnes of PVC waste per annum by 2020. It endeavours to utilise innovative recycling technologies to recycle around 100,000 stubborn PVC materials, which are difficult to reuse.