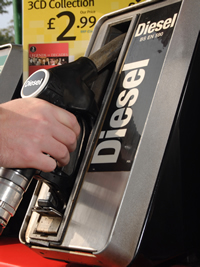 Despite it making headlines that the UK’s petrol prices are back into the global ‘Top Ten’, many failed to recognise that Britain actually has the world’s most expensive diesel.

Out of the 170 countries surveyed by Global Petrol Prices, the UK’s diesel prices were ranked the highest.

With long experience in the sector, The Fuelcard People’s group marketing manager, Steve Clarke, is perfectly positioned to comment on the issue.

He claims that, whilst the research offers an explanation for the internationally differing prices, there is no mystery to the UK’s embarrassing position.

Each nation buys oil on the same global markets, but then imposes its own taxes. The price on our forecourts includes 59% for diesel, 61% for petrol.

Steve argues that having to pay the highest fuel duty in Europe is crippling the UK’s economy – and hindering its recovery.

What does it mean for the UK?

Unfortunately for the UK, even firms in notoriously expensive places – such as Monaco, Switzerland and Luxembourg – pay less for their petrol.

With fuel being a major cost for any business using the roads, the UK is trying to compete internationally on an uneven playing field.

With a deficit to clear and no room for manoeuvre, nobody should expect the government to be reducing fuel duty in the foreseeable future, concludes Steve.

The Fuelcard People aims to reduce refuelling costs for its customers, typically by up to 4p per litre for both petrol and diesel.