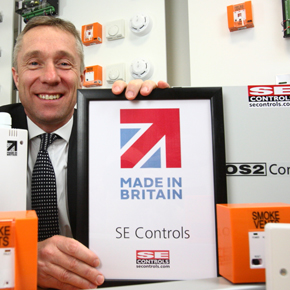 The drop in the pound’s exchange rate against other international currencies following the EU referendum has provided UK based manufacturers with an additional competitive edge.

British manufacturers such as SE Controls have seen their UK made products become more price competitive since the drop in sterling, as a result of the increasing cost of imported products due to Brexit.

SE Controls’ Group Managing Director, Will Perkins (pictured above), explained: “We have seen that some of our competitors that rely on imported products, such as actuators for automated building ventilation systems, are experiencing higher product costs from their suppliers.

The potential knock on effect is that some firms will inevitably need to increase prices to address the cost increase or absorb the rises, which will have an impact on their profitability.”

The international smoke and environmental ventilation specialist is a member of the national ‘Made in Britain’ initiative that promotes British manufacturing and has based its production in the UK for the past 15 years.

Will continued: “The real benefits of manufacturing in the UK are that we have more control over our quality, costs and supply chain. Although the current pricing advantage being experienced by SE Controls and other British manufacturers could only be temporary, our collective reputation for innovation and quality remains unchanged, irrespective of the fluctuations in currency markets.”

A recently published ‘State of Trade’ report from the Federation of Master Builders (FMB) has lent its support to these views.

65 percent of the survey’s respondents have predicted material cost increases, whilst the FMB’s Chief Executive has also highlighted the additional pressures resulting from the falling exchange rate and gathering pace of price inflation.