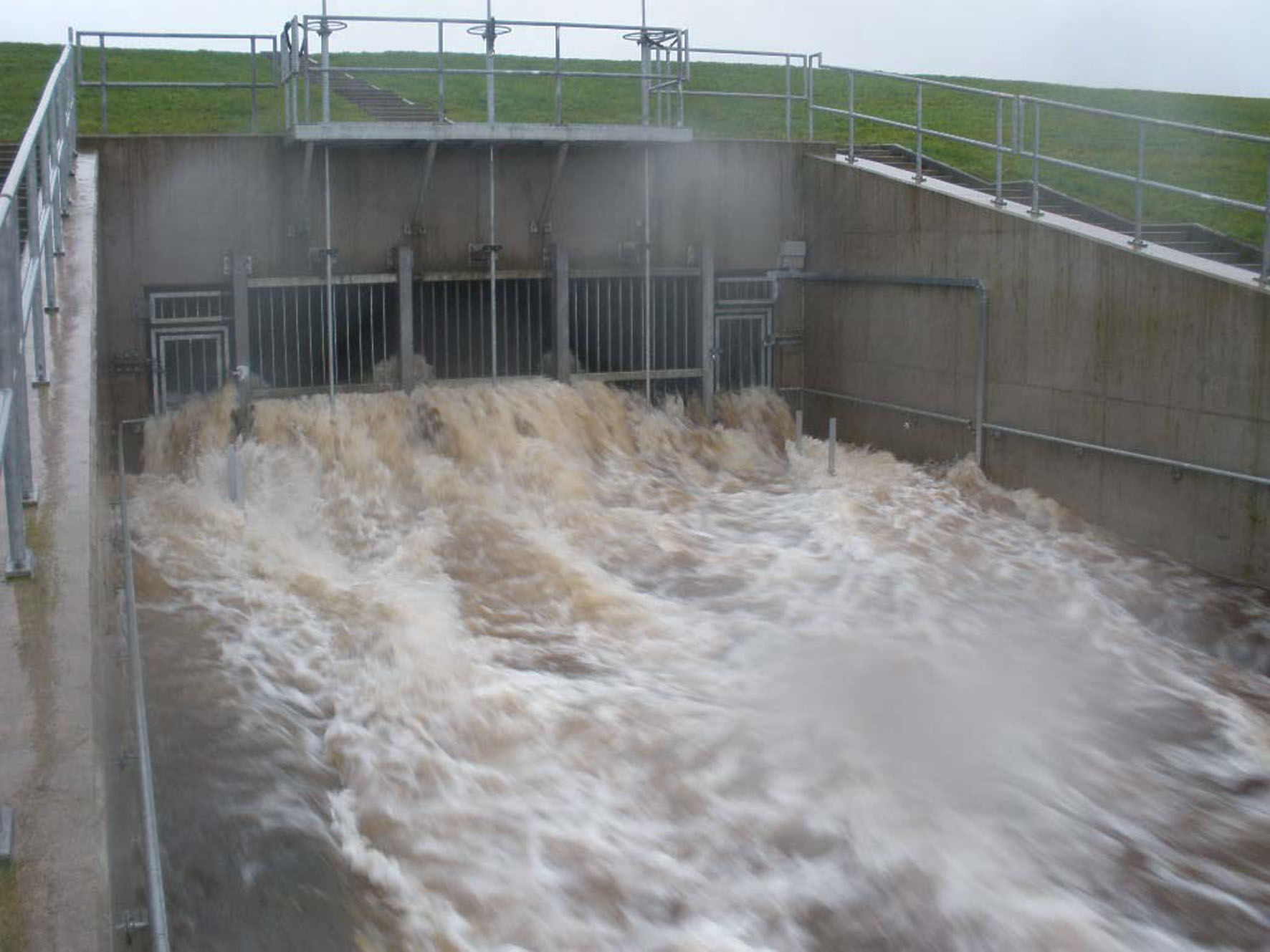 UK properties and homes protected from floods by ‘supersized’ Hydro-Brake

The Government has published details of how £2.3billion of capital investment already committed for flood defence funding as part of the National Infrastructure Plan.

To make the most of limited funding will require the best engineering solutions and sustainable technologies like the Hydro-Brake Flood Alleviation.

Alex Stephenson, chair of the British Water Sustainable Water Management (SuWM) Focus Group and Group Market Development Director for Hydro International: ñWith limited funding available for flood defences, the engineering community must provide judgement, professionalism and long-term vision. We should also be prepared to shout passionately about the best technologies that science and engineering can offer, many of them ‘home-grown’ and proven.î

Installing a giant Hydro-Brake for the Wigan Flood Alleviation Scheme

The Hydro-Brake vortex flow control, invented and developed by Hydro International more than 30 years ago, is an industry-standard method of flow attenuation. Increasingly it is being used as a lower-impact technology for upstream attenuation flood defences, with the largest schemes controlling flows in excess of 33 m3/s and holding back millions of cubic metres of water.

Alex Stephenson, continues: ñHydro-Brake vortex flow control technology is used extensively to prevent surface water and watercourse flooding. It is well proven and completely scalable from small schemes protecting a few properties to giant fluvial dams that protect major urban conurbations. Tackling flooding requires a range of measures on an integrated catchment level, from holding back fluvial flooding in upland catchments to a range of at-source SuDS and surface water control for highways and in our towns and cities. Many of Hydro International’s technologies are quietly not making the news today because they are just doing their job protecting many thousands of homes and properties.î

The opportunities offered by upstream temporary flood storage have attracted attention as a viable, lower-impact solution to flood risk management of river catchments.

The geometry of every Hydro-Brake can be optimised and upstream storage areas fine-tuned ensuring vulnerable properties are protected.

The self-activating hydrodynamic vortex control technology was pioneered in the UK by Hydro in the 1980s and used extensively to prevent surface water and watercourse flooding ever since. Most frequently used in much smaller dimensions as part of new and retrofit surface water drainage designs, the technology is completely scalable from small dispersed schemes with pass forward flow rates of a few litres per second, to giant schemes that protect major urban areas. 2013 saw the rapid acceptance of its most advanced design yet, the Hydro-Brake Optimum.

Hydro-Brake Flood Alleviation installations form part of Scotland’s award-winning and largest flood alleviation scheme, the White Cart Water Flood Prevention Scheme where 1,750 urban and suburban properties are protected, including commercial and residential. The flow controls hold back water behind three dams creating temporary storage areas on agricultural land in the highlands above Glasgow. The water is released downstream at a controlled rate so that it does not overspill flood defences protecting properties downstream.

Two other multi-award winning projects are: a scheme in the valley of the River Douglas in Wigan which protects 610 properties from flooding in the nearby city centre, and River Gaunless in Co. Durham. Smaller communities from 70 to 300 homes have also benefited, for example at Portpatrick, Argyllshire, once devastated by flash floods through its streets, Weedon Bec in Northants and Devil’s Bridge near Sheffield.

For further information call the Hydro-Brake hotline: 01275 337937 or visit the website via the link below.