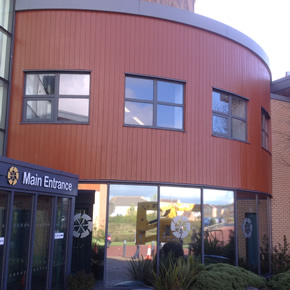 Dulux Trade Ultimate Opaque has been applied to the weathered exterior of the Northumberland-based Blyth Academy building to restore it to its former glory.

Originally constructed in 2002, the Blyth Academy building features a wooden cladded exterior. Unfortunately, the timber had weathered over time, due to the lack of protection it received following its construction.

The school’s derelict, grey and black exterior detracted from its impressive architecture, whilst simultaneously blemishing the view from the overlooking houses.

Prior to the application of Ultimate Opaque, Blyth Academy suffered from a tired exterior

In hope of renewing and protecting the façade, F Southern was contracted to apply an exterior woodstain to it. Dulux Trade Ultimate Opaque was recommended, and specified for use in the shade Almond.

The semi-transparent product has been developed to heighten and protect the look of exterior joinery and cladding. It was able to give Blyth Academy a new depth of colour, whilst highlighting its natural wood grain.

Initially, only the front of the building was scheduled to be stained; the Academy was so impressed with the restoration that it requested the rear of the building to be coated too.

Ultimate Opaque has been formulated to repel water and resist cracking, flaking and peeling; it is able to protect exterior joinery from adverse weather conditions for up to 10 years.