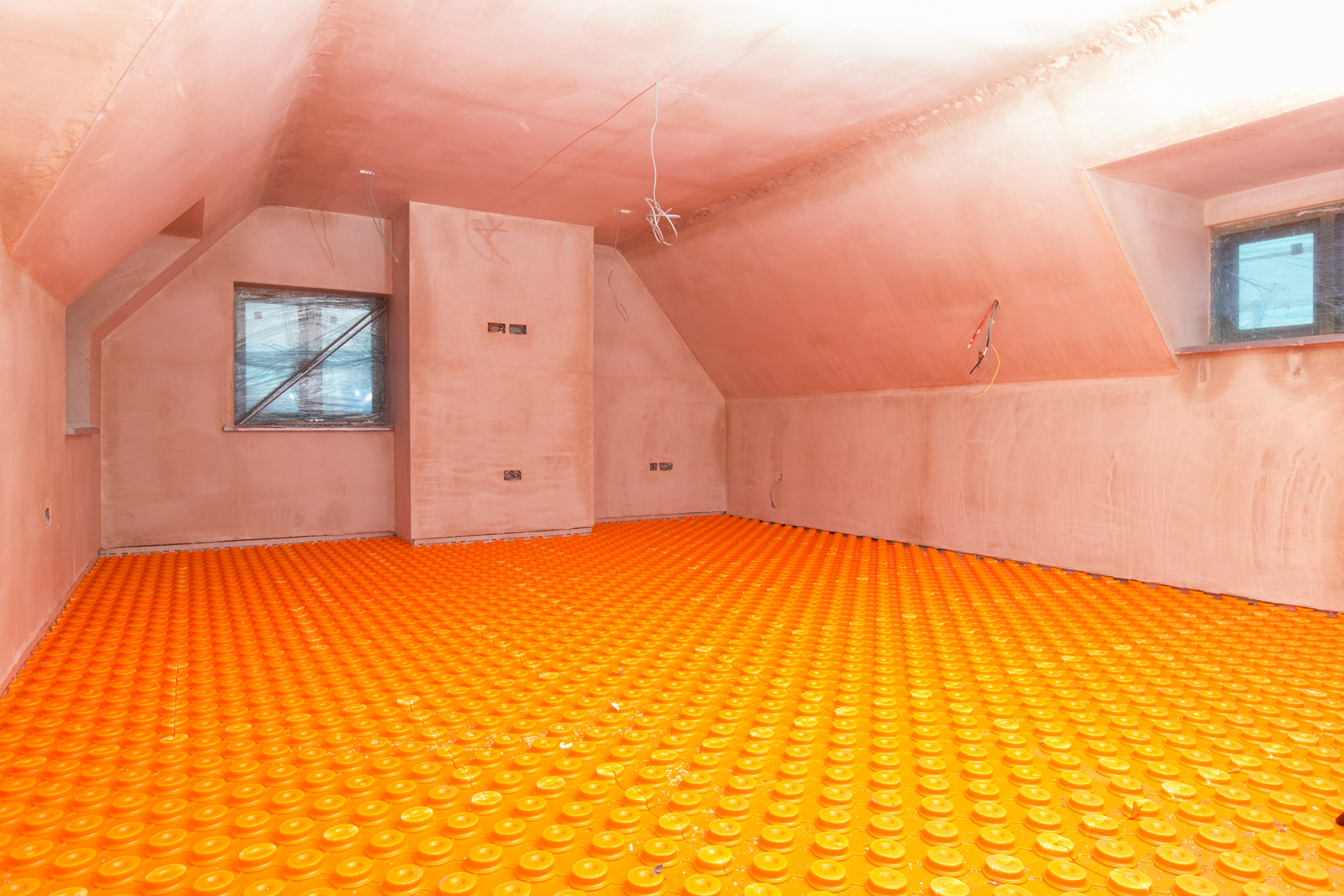 The radical transformation of the 19th century Chitterman House includes a number of eco-friendly and sustainable features. The main house and its outbuildings are being built in several stages.

Link to more details of Stage one – the completion of the outbuildings, which consists of a gymnasium, pool house, games room and garage.

Completion on the second stage

Chitterman House has now reached completion on the second stage of construction which began with the framework and construction of the main house. Set to be complete in summer 2014, this magnificent family home consists of two floors and will eventually accommodate five bedrooms, five wetrooms and 6,000 sq ft of living space.

The house kept its original front walls, whilst the rest of the property has now been completely rebuilt and boasts eco-friendly qualities including the award winning Schlüter-BEKOTEC-THERM underfloor heating system, as well as other sustainable materials.

Out of sight and making no demands on wall space, underfloor heating works efficiently to make the entire floor area into a radiator. Running at a lower temperature, gradually releasing heat evenly across a wide surface area and leaving no cold spots, this alternative heating method was perfect for Chitterman’s needs.

Lee Cox from Leicestershire heating installers, Cox & Looms: ñI have worked with Schlüter-BEKOTEC-THERM before and I must say I was very impressed. Although at first I wasn’t sure about how an underfloor heating system would work with 30% less screed, after my first installation my confidence in the product was firmly established. When we were approached to install the heating system at Chitterman House, it was no surprise to me that Schlüter-BEKOTEC-THERM has been specified. Not only did it provide the environmental credentials that the owner had been looking for, but it would be able to provide a quick release of heat evenly, thanks to its thinner screed. Such a stand out feature means that less energy is used and the installation time is reduced and the end result is a comfortable environment within a large living area.î

The installation of Schlüter-BEKOTEC-THERM is ideal for such a large scale self-build project such as Chitterman House because of its heat generation methods and its regenerative energy sources.

Scott Meadows of Schlüter-Systems: ñIts low supply temperature of approximately 30ÁC, compared to the more conventional 50ÁC or the 70-90ÁC in some radiator systems, means Schlüter-BEKOTEC-THERM is extremely effective both with conventional heat generation methods and regenerative energy sources such as heat pumps or solar panels making it ideal for new build properties and self build projects such as Chitterman House. The optimised control technology also allows for accurate temperature settings and electronic or wireless controls offer the right solution for all building situations.î

The workshop incorporates both classroom and demonstration instruction with the main aim being to get those in attendance familiar with modular screeds and its own underfloor heating system. Demonstrating how to install piped underfloor heating with the correct set-up, it is also ideal for those seeking to learn about the technology behind the products.

As well as the underfloor heating system, Schlüter-KERDI-BOARD has provided a perfectly even substrate to fix to, whilst Schlüter-DITRA has been incorporated on top of the screed to serve as an uncoupling layer, bonded waterproofing assembly and vapour pressure equalisation layer. Such products being used has resulted in a fully functional energy efficient heating system not just for the main house, but also for its outbuildings.

This will include installing the interior features including five wetrooms, which will all incorporate Schlüter-WETROOM products. Contractor, Tony Pearson, comments, ñWe are now looking forward to the next stage in this development and would highly recommend the quality products we have used so far from Schlüter-Systems.

Schlüter-BEKOTEC-THERMuses less material than in other systems, is highly durable, and has proven suitability, with damage free practical application for several years as certified by a number of independent institutes. The system is also available with a five year assembly warranty. Unlike other systems, which just provide component warranties, Schlüter-BEKOTEC-THERM customers can have the peace of mind that our warranty covers the whole floor assembly therefore adding additional safety and benefits to this innovative system.

Link for more details and technical information on Schlüter-BEKOTEC-THERM