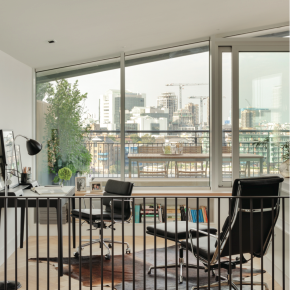 FORMstudio has dramatically reconfigured a 240m2 penthouse, creating a spectacular open-plan living space on its upper floor, find out more in the latest issue of ABC+D magazine.

FORMstudio practice’s radical design approach cleverly rationalises the available space and celebrates the apartment’s spectacular views out over the Thames. From the entrance, a view of the river draws the visitor forward into a double-height space, from which an elegantly detailed stairway leads upward, revealing the impressively spacious open-plan dining and living area above.

The penthouse is arranged over the top two floors of a prominent high-rise residential development, originally designed by Lifschutz Davidson Sandilands – a design and build project with an internal layout that divided both the entry and upper levels into a labyrinth of cellular spaces. 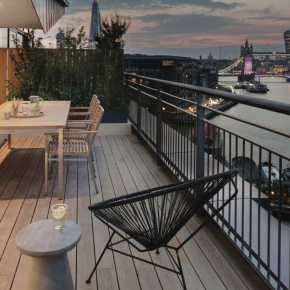 FORMstudio’s fundamental reconfiguration was made possible by specifying a fire engineered solution to Means of Escape, making use of full-height doors held open on electro-magnetic holds and concealed in wall linings.

The former arrangement ignored the spatial potential offered by the distinctive, soaring wing roof and the spectacular wrap-around views over the river and to the city beyond.

FORMstudio’s fundamental reconfiguration was made possible by specifying a fire engineered solution to Means of Escape, making use of full-height doors held open on electro-magnetic holds and concealed in wall linings.

On the lower level, a spectacular river-facing master bedroom suite includes a floor-to-ceiling, glazed oriel window, cantilevered out over the water and equipped with a rotating Citterio-designed circular sofa, to exploit the Canaletto-like panoramic view. Two further bedroom suites, accessed off the linear entrance route, complete the rational spatial arrangement of the lower floor.

The generous upper floor space features subtle changes in floor level, creating an interior landscape that defines areas for sitting, dining/cooking and working without the need for dividing walls. The raised level of the principle living area has dramatically improved sightlines to the river from a sitting position and created on-level access to the terrace doors. 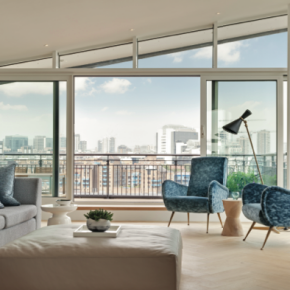 From mobile phones, to cars, to hotels, the level of sophistication expected by the consumer has soared at an exponential rate over the last twenty years. This has prompted a fundamental rethinking of the required specification for high-end apartments.

This one-off project, for a developer more usually involved in building in excess of ten unit new-build apartment schemes, clearly demonstrates that sophistication commands an enhanced price tag, adding considerable value for the developer client in the process.

FORMstudio has successfully identified the significant development value in the differential between a flat with a 1990s high-end specificati on and a bespoke architecturally designed apartment – this impressive penthouse responds perfectly to the exacting standards expected at the top end of today’s market.