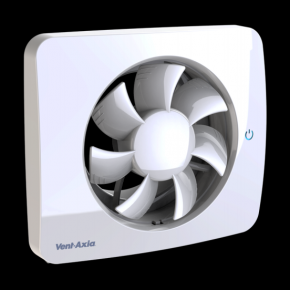 Leading British ventilation manufacturer Vent-Axia has announced it has won an award in the Red Dot Award: Product Design 2019 competition for its PureAir Sense.

This fan is the UK’s only bathroom fan with Odour Sense Technology – the prestigious accolade, which recognises exceptional innovation and design quality, will be presented to Sussex-based Vent-Axia at an awards ceremony in Essen, Germany, next month.

One of the world’s largest design competitions, the Red Dot Award has been providing a platform for designers and companies to assess good design for over 60 years.

With the awards programme true to its motto of ‘In search of good design and innovation’, its jury has individually tested more than 5,500 products for the 2019 awards, with entries submitted from 55 countries.

Commenting on the success, Stephen Totman, product manager at Vent-Axia, said: “We are delighted to win a prestigious Red Dot Award which recognises the outstanding design quality of the PureAir Sense and is an independent validation of the true uniqueness of this fan.

“Vent-Axia has been leading the way in innovative fan design for over 80 years and we are committed to producing ground-breaking design for years to come.

“As the health implications associated with poor indoor air quality (IAQ) continue to gain coverage in the media consumers are demanding more effective ventilation in their homes.

“The launch of the UK Government’s Clean Air Strategy has further increased this focus. As a result, consumers are demanding sophisticated ventilation that will help improve IAQ making the PureAir Sense an attractive option for households.”

Vent-Axia beat stiff competition this year to win an award in the Product Design category at the Red Dot Awards, with the quality of entries said to be very high.

Designed to improve indoor air quality, the Vent-Axia PureAir Sense is equipped with a pioneering odour sensor, that increases airflow when the air in a home is poor, creating a comfortable living environment.

If the sensor detects a strong odour, the fan speed increases and quickly extracts the odour, ensuring the air remains fresh.

Aesthetically, the PureAir Sense hits the design mark too, with its minimal styling, clean lines and optional cover that complements any modern bathroom.

In addition, the good news is improving a bathroom’s air quality doesn’t have to be noisy either – creating an oasis of calm, the Vent-Axia PureAir Sense has whisper quiet operation, meaning households can relax in the knowledge that that they will breathing in healthy air, undisturbed.

Marking the next generation of sophisticated controls, the Vent-Axia PureAir Sense is delivered factory set for continuous operation at low speed with the fan featuring an adjustable timer which can be triggered via a switch live or light sensor.

This intuitive sensor recognises room occupancy through light movement and shadows, but it can distinguish between car headlights flashing and people moving about to avoid nuisance running.

A delay-on feature can also be set to avoid the fan being triggered in the night during quick bathroom visits.

The light sensor also acts as an overrun timer, without having to be controlled through the light switch, meaning households with a basic fan can upgrade to a timer fan, with no need to carry out costly and time-consuming rewiring.

Leading the way in ventilation, the Vent-Axia PureAir Sense introduces an intelligent, fully automatic humidistat which helps with moisture control.

This means the fan learns to run only when it can make a difference to IAQ. Continually monitoring and recording the moisture content the PureAir Sense maps a home’s annual humidity profile.

This process allows the fan to run only when it can lower the moisture content in the air, reducing nuisance running and helping ensure a healthy environment.

The fan is also popular with electricians, as it is quick and easy to install with the fan delivered with factory settings that will be perfect for the majority of projects.

This means the fan install only involves fitting and there is no need for set up. If a customer requires additional customisation, the fan’s features can easily be altered via a user-friendly LED touch panel or a downloadable app on a smart phone.

Finally, to demonstrate Vent-Axia’s belief in the quality of this fan, the PureAir Sense comes with a 7-year guarantee, so electricians can fit and forget the fan, confident that it will create fewer callbacks.

Plus, further adding to install flexibility, the PureAir Sense offers a powerful airflow of up to 39l/s, meaning it can cope with long ducts and bends up to 2m, with no compromise on ventilation.