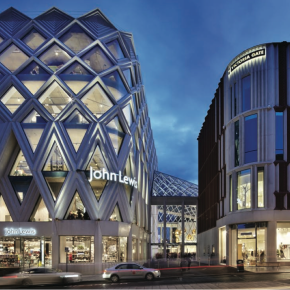 Anyone visiting the centre of Leeds for the first time cannot fail to notice and be impressed by the striking architecture of Victoria Gate, the most recent addition to the city’s vibrant shopping scene. Find out more in the latest issue of ABC+D magazine.

As well as the eye-catching external façades, Victoria Gate offers superb standout features as soon as you walk inside. Storefronts are made with panels of curved glass, giving them a distinctively modern feel – but your eye will soon be drawn upwards.

Like its sister arcade, Victoria Gate has a statement roof, with 1,030 diamond-shaped panels of glass set within an intricate steel structure that culminates in a beautiful roof light. Looking down, things are equally impressive: for example, the herringbone floor is made with 30,000 granite tiles in 13 colours.

Phase I of this major development, now largely complete, consists of a flagship John Lewis store, with a façade drawing on Leeds’ textile heritage, an arcade with stores, restaurants, cafés and leisure space in an elegantly designed two-street arcade linking Victoria Quarter to the John Lewis store.

There is also a multi-storey car park for up to 800 cars. Altogether, Victoria Gate will accommodate around 42,000m2 of retail and leisure space. As well as regenerating the physical space, the first phase will also deliver up to 1,000 retail and hospitality jobs.

For Victoria Gate, John Lewis’ first department store at Leeds and one of the biggest outside London, both client Hammerson and architect ACME decided to create a civic building fit for a major European city and a future classic for architecture in Leeds.

Inspired by the city’s textile and cloth heritage, the result is a building that has texture, with strong three dimensional facades and finishes complementing the white terracotta materials used in adjacent landmark buildings. With five trading levels, the department store frames the scheme and is a major entrance to Leeds’ retail core from the eastern side. 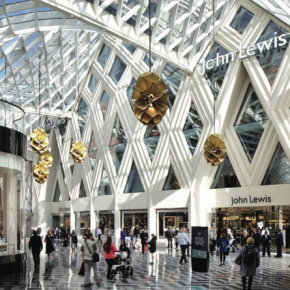 Both the client and the architect decided to create a civic building fit for a major European city and a future classic for architecture in Leeds.

In addition, it continues the design principles established by Sir Reginald Blomfield in the 1920s by creating a new bookend building for the scheme.

Opened on 20 October 2016, the five-storey shop is not just focusing on supplying goods – which are increasingly bought online – but is also offering services such as a travel agent and beauty spa to lure people onto the shop floor. John Lewis stated that more than 1,000 people entered the shop in the first hour of its opening.

To produce the required high quality architectural finishes for the façades, precast concrete specialist, Techrete (UK), worked with the architect, ACME, through 2013 and 2014 to explore the possibilities of using precast concrete panels on the façade.

This early engagement in the initial design development led to the creation of full-scale mock-ups at the company’s Brigg factory. These allowed the architect to explore the use of different precast finishes and relief as well as the use of terracotta to achieve the envisioned three- dimensional façade.

The work demonstrated the considerable variation in relief that can be achieved with polished and acid- etched precast panels and helped the architect finalise the design intent. Teams from Hammerson and John Lewis were heavily involved, visiting the company’s Brigg factory to review what was possible and approve the precast concrete cladding.

Owing to the complex nature of the project, the design was carried out in BIM, maximising the advantages of 3D modelling. Techrete used Revit to develop its model and, every month, a federated combined project model was produced for design review. Any necessary changes could then be handled in model space before manufacture, streamlining the process for cladding, steel and window packages. 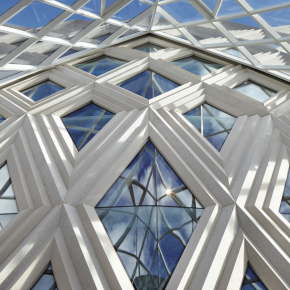 After construction, the company’s site team confirmed the as-built façade met the brief to exacting standards by using laser scan.

The complex panels – which have deep relief and two different finishes – were made at both the UK and Irish factories. Base panels have a white, finely finished acid etch, punctuated with jewel-like polished concrete elements that highlight the diagrid pattern across the façade.

The large panel sizes, 4m on their shortest edge, push the boundaries of what can be transported, with some weighing up to 14 tonnes. Most were transported on their side and, once on site, were lifted by crane and rotated in the air to the correct installation angle before being placed on the building.

The complexity of the diagrid panels meant that a typical steel column-and-beam structure was unsuitable, so the structure was designed as a series of diagonals to suit the façade pattern. The panels are supported off this grid with corbel supports and restraints co-ordinated as part of the BIM model. For accuracy, secondary fixings were made off site as part of the primary steel.

The large size of the panels ensured the building was rapidly enclosed. In addition, Techrete, co-ordinating closely with Sir Robert McAlpine, worked around the clock at peak times to help hit the tight delivery programme.