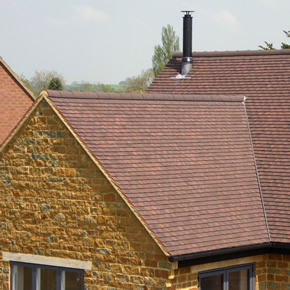 Redland has extended its Rosemary Clay Craftsman range to include a third tile: the Victorian boasts a coarser texture than its counterparts, Albury and Hawkhurst.

The first Rosemary Clay Craftsman tile was developed in 1838, the year of Queen Victoria’s coronation. They were laid on buildings across the UK and many remain in situ to this day; Redland experienced a demand for contemporary versions to match the original tiles from contractors, architects and specifiers.

As a response, the company developed the Victoria. The new tile has been designed to add texture and character to traditional roofs. Dark in colour with an aged effect, it complements areas of conservation.

Unlike its predecessor, the new Victoria has been tested against high rains and driving winds, inside Redland’s specially-engineered wind tunnel. Providing that installers comply with Redland’s fixing recommendations, the tiles will meet the requirements of BS 5534: 2014 Code of Practice for Slating and Tiling.

In addition to the Victoria, Redland’s Rosemary Clay Craftsman range encompasses the Hawkhurst and Albury, which benefit from orange-red sanded surfaces. Random black patterning serves to imitate a weathered aesthetic.

Redland has employed a wealth of design elements – including varying hanging lengths, textured surfaces and irregular distortions to the front edge – to replicate the look and feel of a handmade tile.

Whilst the tiles are often used in restoration and refurbishment projects, they are also in demand for new build developments in conservation areas. Redland has developed an accompanying range of accessories and components to ensure that the tiles can be laid on a variety of roof configurations.