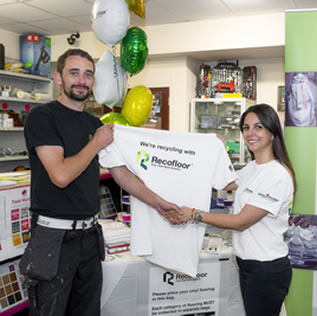 Vinyl recycling Take Back’ scheme has diverted 1,900 tonnes of waste

Set up in 2009 by flooring manufacturers Altro and Polyflor, the Take Back initiative has so far diverted over 1,900 tonnes of waste vinyl flooring from being sent to the landfill

More than 42 tonnes of vinyl flooring was collected in September due to the raised awareness of the scheme through the series of planned birthday celebrations.

The event at Ashmount Flooring Supplies in Tottenham, Beach Bros in Exeter and 3D Flooring in Cardiff attracted many customers who were keen to know how they could get involved in the scheme and what Recofloor had to offer.

Bags were given out to all trade counter customers to encourage visitors to recycle used vinyl, whilst Recofloor bins were installed at Carpet & Flooring’s new Gateshead branch.