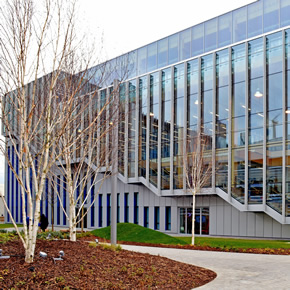 VS-1 curtain walling system specified for ‘Believe in Better’ development

GLASSOLUTIONS’ VS-1 curtain walling system has been specified for Sky’s new community engagement and educational facility, which has been built at its West London campus.

Developed in conjunction with Mace, Sky’s 3,000m2 timber framed ‘Believe in Better’ Building accommodates a number of educational and community facilities. It houses the Sky Academy, which aims to encourage young people to engage with television, sport and their creativity to develop new skills.

The building has been designed in-line with Sky’s sustainability strategy: it utilises photovoltaic electricity generation, rainwater harvesting, and benefits from thermally efficient fabric. Since its completion, it has been awarded a BREEAM ‘Excellent’ rating.

GLASSOLUTIONS was contracted to design, manufacture and install the facade for the building. Working from Arup Associates’ initial design concepts, the company developed a system which comprises a centrepiece ground to fourth storey staircase, offering views across the Sky complex.

As a mullion-only system, which requires no transoms or mid-point horizontal structural support, VS-1 was deemed particularly suitable for use.

The ‘Believe in Better’ Building features several externally mounted VS-1 mullions, which are ‘aerofoil’ shaped to lend support to the glazing along the full length of the staircase.

These aluminium extrusions are secured using stainless steel brackets at top and bottom cantilevers from the building’s timber structure to ensure a secure attachment.

VS-1’s brackets hold the glass panels away from the mullion to give it a ‘floating’ effect. The brackets have been siliconed at the top and bottom, creating a flush finish.

Each double glazed sealed unit features 13.5mm Saint-Gobain Planidur laminated panes of glass on the interior; 8mm of Securit has been used on the exterior. The glass is Saint-Gobain’s COOL-LITE SKN165 II which was chosen to balance solar control and thermal insulation.

Thanks to the VS-1 curtain walling system, the glazing system is able to span large heights with clean, unbroken sightlines.