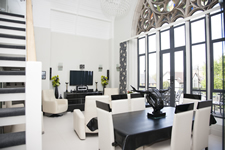 Originally built in 1907, Albert Road Wesleyan Methodist Church suffered from a bomb attack during the Second World War. After serving as a community space for many years after its destruction, it was converted for a second time in 2012.

Features of the renovation include an attic style storage space and glass walled decks for split level loft style accommodation.

However, much of church’s original design and architectural features have been retained, including the bell tower, which is now used as a wine cellar with a roof top terrace.

The Fishers reside in an open plan apartment, which is located on an upper level of the renovated church.

Electric underfloor heating was originally installed to heat their home, but it soon became apparent that it could’t cater for the apartment with its high ceilings and unusual shape.

Portable calor gas and electric fan heaters were added to heating system, but the desired levels of warmth were still not being achieved, despite fuel bills ranging from £600 to £700 a month.

The Fishers’ apartment is now heated by Johnson & Starley’s systems

Ducting was fitted behind the ceiling in the kitchen, bathrooms and bedrooms to maintain the apartment’s aesthetic. Discreet outlet grills were also installed in each room, with two at floor level in the main living area.

Extract vents work to remove the warm air that has risen to the ceiling and duct it back down to ground level for energy saving recirculation.

The system has added the advantage of domestic hot water provision and, with a 20kW output, it offers up to 98% thermal efficiency.

Barry Williamson, who specified the system, dubs the WarmCair as a new generation of warm air heating, which performs as well as a modern gas fired wet heating system, without heat loss.

The Aquastar water storage cylinder has been installed in the apartment’s airing cupboard, alongside WarmCair

One of Johnson & Starley’s Aquastar hot water storage cylinders was fitted to work in conjunction with the WarmCair.

Manufactured from stainless steel, the cylinder utilises a 50mm layer of insulation to retain heat.

It offers enough capacity to store the hot water generated by the Fishers’ WarmCair, whilst offering a 3kW backup immersion heater.

Since the installation of the systems, the Fishers’ energy bills have reduced by 40%.

Johnson & Starley’s Home ‘n Dry unit has also been used to improve the condition of the historic building.

The main entrance hall was suffering from mould and damp; as a whole-house, positive input ventilation system, Home ‘n Dry was installed in the building’s coat cupboard, adjacent to its stairwell.

The system creates a positive pressure, forcing stale air to escape through the fabric of the building. It offers running costs that can be as little as 1p per day, with an adjustable low energy DC fan.

Although further remedial works to the outside brickwork are required, the unit has alleviated the damp inside the building.