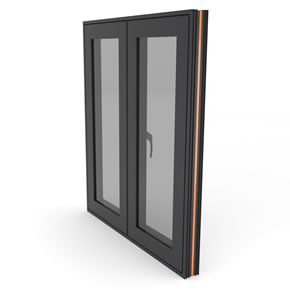 Following its launch at the FIT Show earlier this year, Synseal’s WarmCore Window has been met with optimisim and demand from the market.

The new window was officially introduced to the market at FIT 2016, with 14 launch partners signed up prior to the launch date. Since the show, a further 7 have bought into the WarmCore brand, inspired by first-hand experiences with the technology.

The company’s WarmCore technology has been designed to fuse thermal efficiency and aesthetics in one aluminium product: WarmCore is built around a full width thermal core, which maximises the use of lower conductivity material. Recent research has revealed that the BSI Kitemarked system is 25% more efficient at keeping heat in homes than traditional aluminium solutions.

Manufactured from high grade aluminium, the WarmCore window boasts a rigid structure, which can resist impact.

Available in a ‘flush sash’ option, WarmCore casement windows make use of a stepped outer frame; the sash sits adjacent to the rest of the window. The contemporary system utilises a future mullion, which echoes the flush sash feature, creating a bead line in-between the two windows.

WarmCore is currently on display at Synseal’s Huthwaite showroom; the company has also built an impressive supply chain, with 21 regional and national fabricators now offering the system.