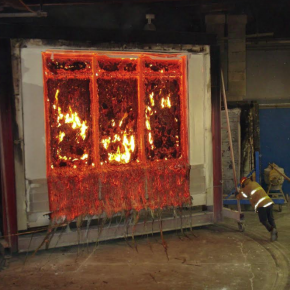 Water torture and the Great Exhibition: A Wrightstyle article

Wrightstyle Limited is one of the UK’s leading suppliers of advanced steel and aluminium glazing systems and exports internationally. Jane Embury, the company’s marketing director, explains the origins of the notoriously difficult US fire testing regime.

“WATER is not something you usually associate with testing the strength of a glazing system.

But it’s still being practiced to test the protective level of glazing systems in the United States. Nowadays, it’s called the hose stream test. The test, controversial and challenging, is notoriously difficult.

American test methodology requires, as in Europe and elsewhere, for the glazing system to be subjected to furnace temperatures of over 1750 degrees F, testing the strength of the glass, the protective level of the glazing system, and its overall capability to maintain compartmentation in a fire situation.

However, immediately after fire exposure, the American testing standard also requires the glazing system, to then be subjected to a high-pressure fire-hose test, aimed directly onto the super-heated steel and glass assembly. 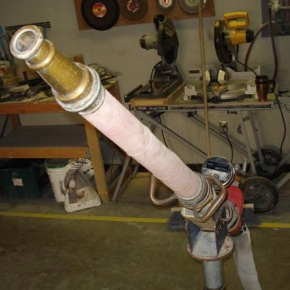 In the hose stream test, the longer the fire resistance being applied for, then the longer and more severe is the high-pressure water exposure. This tests the glass for the thermal shock of being deluged and suddenly cooled by the fire fighting services, as well as by the building’s own sprinkler system.

Like many test regimes, the hose stream test has its roots in a byegone age, and wasn’t even originally designed to test the glass. So byegone an age, in fact, that Queen Victoria was still on the throne.

The reason for this was a sea-change in architecture and, perhaps surprisingly, it was a British architect, Joseph Paxton, best known for designing greenhouses, who changed everything.

Paxton was the surprise choice to design the main pavilion for the 1851 Great Exhibition and Paxton simply drew on his horticultural experience to design a structure that contained over 300,000 panels of glass to a total of more than one million square feet.

Joseph Paxton’s experience in garden design served him well because, by scaling up his earlier work, design to completion took just seven months. The result was a giant greenhouse: an entire, huge building made only of wrought iron and glass.

The finished building was, of course, a wonder of its day. The public, and not a few architects, flocked to London from all over the world. In total, over six million of them – not bad for an age without budget airlines or the motorcar.

Inside its great halls were some 13,000 exhibits and the money it generated allowed the government to build other great symbols of Empire, including the Albert Hall and the Victoria and Albert Museum.

Not a few of the architects who saw the Great Exhibition were from America, and they took the concepts they’d seen back to the United States. The balance between form and function was being rewritten: iron, and later steel, now allowed the architect to think in new ways about building design. The modern skyscraper was born.

However, the hose stream test, first introduced in 1918, wasn’t designed with glass in mind. It was designed to test the integrity of the cast and wrought ironwork that had been popularised by the Great Exhibition.

At that time, there was little understanding of the critical importance of compatibility between frame and glass. The result was that the iron frame often failed – putting fire-fighters and a building’s occupants at risk.

The hose stream test, once also a UK requirement, went out of fashion as iron was replaced with steel – a material immensely stronger and more resilient than the iron it replaced.

However, and despite enormous advances in steel glazing systems, the hose stream test has been retained in the USA for all fire-rated systems seeking accreditation for more than one hour of protection – despite growing calls for it to be abandoned as an anachronism.

At Wrightstyle, we export our curtain walling, door, screen and window systems worldwide, so our systems had to undergo the dreaded hose stream test.

Not only is that useful for the US export market, but also important in parts of the Middle East, where many American architects are based, or when American companies are looking to build to US fire standards.

It does however seem strange that, in a world where our glass and glazing systems are designed to withstand searing temperatures or the blast impact of a lorry bomb, the real test, at least in the USA, comes down to a stream of cold water.”