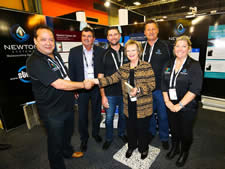 buildnz is one of the leading trade events in New Zealand’s construction and building calendar.

The country’s construction industry is predicted to grow by approximately 10% over the next three years, meaning that, for 2015, the show was busier than ever.

Taking place from 25th to 27th June, the event presented Newton Systems NZ with the opportunity to showcase its product range to its customers.

Newton exhibited its range of waterproofing solutions in conjunction with its German supplier, StekoX.

The ‘Made in Germany’ pavilion presented opportunities that are available through German building technology, which leads the industry.

The German hosts presented Newton Systems NZ with the Football World Cup, in recognition of the best stand in the German Pavilion

By exhibiting in the pavilion, Newton Systems NZ was able to establish its status as waterproofing experts and specialists in the field.

This image was cemented by the heritage of Newton System NZ’s parent company, Newton Waterproofing Systems, which was founded only shortly after New Zealand itself was discovered.

We were able to get even the most seasoned architects, designers and builders to re-evaluate what they thought about the waterproofing of our structures, says the company’s Sales and Business Manager, Tim Baird.

Tim and the rest of the team were pleased with Newton Systems NZ’s success at the event.

Their efforts were noticed by buildnz’s organisers; an impressed Anne-Marie Schleich, New Zealand’s German Ambassador, paid a visit to the stand.

In addition to this, they were presented with the Football World Cup, in recognition of the best display in the German Pavilion.